Father of six: the story of Sapper George Frederick Bagwell

The Armistice of Mudros, agreed and signed at the end of October 1918, ended hostilities in the Middle Eastern campaigns between the Ottoman Empire and the Allies of the First World War. This was followed some 3 weeks later by the Armistice of 11 November 1918 that ended fighting on land, sea and air between the Allies and their opponent, Germany. For the majority of families this meant that the war was over and they could look forward to the return of their loved ones. However for one family in Newton Abbot, Devon, there was more bad news to come.

This announcement  in ‘The Western Times’ appeared on 3 consecutive days in January 1919, some 2 months after the Armistice of November 1918. Sapper George Frederick Bagwell had died of Broncho-pneumonia in a hospital in Egypt, which must have seemed a world away from Newton Abbot in Devon to his widow Alberta. However, his death was all the more tragic – the notice does not mention that their six children had also lost their father. 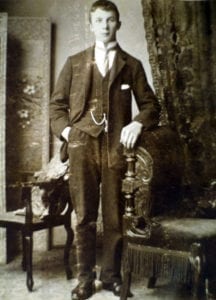 George Frederick Bagwell’s story began on 31 August 1884 when he was born in the Union Workhouse in Newton Abbot. His birth was registered with his mother Leah’s surname as she was unmarried and his father was not named.  In 1891 he was living with Henry and Sophia Aggett and family as their ‘adopted son’, and some ten years later he was boarding with a different family and aged 16 he was working as a Wool Sorter in a factory. On the 27 March 1905 George Frederick married Alberta Milford in the Baptist Chapel in Newton Abbot, where George was a lay preacher.

George Frederick and his wife Alberta lived at a number of different addresses in the area and also spent some time living in Exeter, where they lived in 10 King St., Cowley Road at the time of the 1911 census. George Frederick was working as an Oil Salesman at that time. 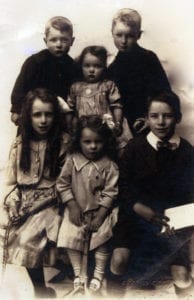 They had 7 children, although one baby girl, Ethel, died in 1909 when the family lived in Exeter. Their children were Ernest Frederick (born 16 January 1906), Leah Rosetta (born 20 October 1907), William George (born 12 November 1910) Gordon Cecil (born 14 November 1912) Hilda Irene (born 12 May 1914 and Emilie Evelyn (born 8 April 1916). The family returned to live in Newton Abbot ahead of George Frederick leaving for overseas service in the First World War.

Although baptised as George Frederick he was known as Fred and his forenames were reversed on his army records. George Frederick is known to have served with the local Territorial Force of the Royal Engineers (RE) and this is shown on his Medal Index card, which confirms that he later enlisted as a Sapper in the RE.

The Devonshire Fortress Engineers was the local Territorial Force, with bases in Plymouth, Torquay and Exeter. Nos 2 and 3 Works Companies of that force were based in Exeter where George Frederick is known to have lived. Fortunately, his army service papers survived so it is possible to confirm that he completed his attestation papers in December 1915 and was mobilised for Home service in July 1916. His records show that he had received a recruiting notice (Army Form B 2065) thus indicating that he enlisted voluntarily.  He gave his occupation at that time as a Horseman. His records show that he was assigned to the 570th (Devon) Army Troops Company, which was formerly the 2/1st Devon (Works) Company, one of those that had been based in Exeter. 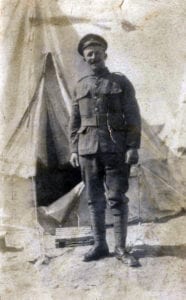 George Frederick was eventually to see service overseas and was posted abroad in September 1917. His service papers indicate that he left Southampton on 26 September 1917 and was bound for Egypt, arriving in Alexandria on 20 October 1917. Details of the service of the Devon companies are sketchy. It is known that 570th and 571st Companies disembarked at Alexandria in October 1917, where 569th Company was already engaged on various duties around the ports and camps. At that stage of the Sinai and Palestine Campaign, the Egyptian Expeditionary Force (EEF) was about to launch the Battle of Beersheba and begin its advance to capture Jerusalem. The three companies served on the vital lines of communications in Egypt and Palestine supporting the EEF for the rest of the war.

Details about the campaign in Palestine from the end of 1917 when George Frederick arrived and the conditions experienced by the soldiers there are described by Gareth Davies, a military historian. It was at the end of 1917 that another soldier from Newton Abbot lost his life in Palestine – Gilbert Doke Vicary, one of the Dyrons Boys, died of his wounds and is buried in Gaza. George Frederick may have known the Vicary family name as it was a local employer in Newton Abbot.

It is not known where George Frederick served during 1918, but in early 1919 he was taken ill and treated in 44 Stationary Hospital from 9 January 1919 until his death at 4pm on 12 January 1919. His records include a fairly detailed medical care sheet describing his illness and the treatment he received. In addition to medications he was also prescribed ‘Brandy to be given 4-hourly’. He died of Broncho-pneumonia, often a complication of ‘flu which was pandemic at that time and a cause of death of many soldiers. (See also: Turin Men)

44 Stationary Hospital was situated in Kantara, a town on the eastern side of the Suez Canal and one which was important for the EEF, being the point where both the railway and the pipeline started east across the Sinai.

George Frederick is buried in the Kantara Cemetery. His headstone records his name as Frederick George, gives his rank and date of death but it bears no family epitaph.

As was usual after a soldier’s death, George Frederick’s personal effects were eventually returned to Alberta and the poignant list in his records reads: Belt, Coins, Watch (broken), Ring (Mother of pearl), Wallet, Photos, Cards, Letter and his identity disc. 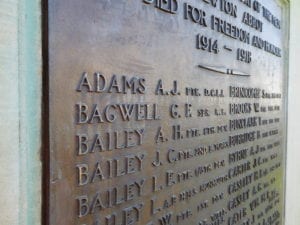 George Frederick is also commemorated on the Newton Abbot Memorial, his name being recorded accurately.

With thanks to staff at the Torquay Museum for the supply of text and images. In 2018/2019 Torquay Museum ran a project funded by the Wellcome Foundation entitled ‘Fatal Flu: Spanish Flu and the Threat of Pandemic’, which explored personal stories behind this deadly virus, which killed so many First World War soldiers.