Women Away from the Western Front

As the First World War expanded into other parts of the world beyond France and Flanders, so did the opportunities for many British women both to play an active role in the war and to experience travel to more distant countries such as Egypt, Salonika and Palestine.

A Hospital Ward : a dysentery ward of the General Hospital at Port Said © IWM (Art.IWM ART 2941)

Most of these women undertook work in medical environments in either voluntary or trained positions as nurses or as doctors; whilst others worked in more general administration or support roles such as drivers, orderlies and cooks. 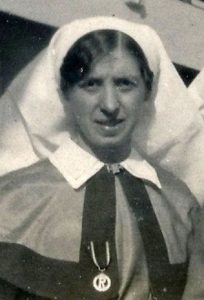 Many of the trained nurses worked with the Queen Alexandra’s Imperial Military Nursing Service (QAIMNS and its Reserve). One of these trained nurses was Elsie Russell from Edinburgh who joined up as a reserved nurse in the QAIMNS in 1914 at the outbreak of the First World War. It is known that she went to the Queen Alexandra hospital in Portsmouth where she would have been caring for soldiers from the Western Front and from there she seems to have been on a troopship sailing between the UK and Canada, probably bringing Canadian troops to Europe. Elsie was then sent away from the Western Front to Egypt, firstly to Cairo and then Alexandria. She worked at Ras el tin in Alexandria, which was a British barracks with a hospital caring for troops involved in fighting in Sinai, Palestine and Mesopotamia. Elsie’s wartime experiences were captured in photographs and with the kind permission of her grandson, Stuart James we are able to share her story.

In addition to trained nurses, thousands of women undertook roles as Voluntary Aid Detachments (VADs) with the Red Cross and Order of St John and many of these also found themselves working away from the Western Front in countries such as Egypt, Serbia, Salonika and Mesopotamia. For example, Emily Rice left home in Dublin in 1915 and worked in military hospitals in Netley near Southampton (1915), Malta (1915 – 1917), Salonika (1917) and Mesopotamia (1917 – 1919).

Some hospitals were set up to support campaigns taking place away from the Western Front, including the Scottish Women’s Hospital, founded by Dr Elsie Maud Inglis, which opened in Serbia in 1915 and was run by women. These hospitals worked mainly with the Allies and not the British, but they provided opportunities for more women to work overseas in countries such as the Balkans, Romania and Russia. Ishobel Ross, one of its better known volunteers on the Balkan Front kept a detailed diary which covered several years and described her work in the kitchens and the events at the hospital: Little Grey Partridge: the diary of Ishobel Ross, Serbia 1916-1917, (Aberdeen University Press, 1988).

In addition to some diaries and photographic records we are fortunate to be able to hear some of the recollections of these women from over 100 years ago. Click on their names to hear them.

Some researchers have studied this lesser known aspect of the First World War, for example:

Nadia Atia, a Lecturer in World Literature at Queen Mary, University of London has undertaken some research into this topic and here describes: The women’s war in the Middle East – women’s First World War service in Egypt, Gallipoli, Mesopotamia and Palestine