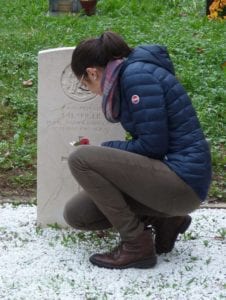 In July 2018, we were contacted by Emma Pace, an Italian teacher living near Turin. She had been visiting her local cemetery and was intrigued by the graves of sixteen British soldiers dating from the end of the First World War. This led us on to a fascinating research project into their stories; the project highlight was when Emma took her students to the cemetery on the centenary of the Armistice to commemorate the soldiers who died so far from home.

Although the main project is complete, more extensive research is still on-going into the history of the hospital, other soldiers known to have been patients there and the personnel connected with the hospital.

How did the soldiers end up in Turin?

Most of the soldiers buried in the Turin Town cemetery, the Meana Di Susa and Oulx Communal cemeteries in Italy were not casualties of combat from the nearby battlefields, but died from illness or disease whilst travelling through Italy from other campaign areas of the First World War. They died between May 1918 and July 1919 and were known to have served in the Salonika campaign, the Middle East, India, Italy and France. Most of them had been treated at the ‘B’ section of 29th Stationary Hospital which was situated in Turin.

A staging post on the way back to Britain

In May, 1915, the Italians entered the war on the Allied side and British and Commonwealth troops were at the Italian Front between November 1917 and November 1918. From the summer of 1917 until late 1918, the Mediterranean Line of Communication (LoC) for the British Salonika Force ran the length of Italy from Taranto in the south-east, to Turin in the north-west and overland to Cherbourg. This line transported reinforcements to and sick and wounded from Salonika and the Eastern theatres of war. Rest camps and medical units were established at various locations in northern Italy behind the Front in order to support the men on their journey. Some of these units remained until 1919.

Before this line of communication had been secured, the sick and wounded had to be transferred to Italian hospitals and Royal Army Medical Corps staff sent there for duty. In May 1917, Sir Walter F Becker, an English resident in Turin offered an auxiliary hospital, which he was maintaining there, for use by British casualties. He provided and maintained the equipment while the British Red Cross Society in Italy initially provided the staff and the Italian authorities provided food as described in Medical services; general history, Vol III, p.331, by Sir W. G. Macpherson (HMSO, 1924).

Cremona was considered the most suitable location for an advanced hospital centre as it was on the line of the retreat in the event of enemy breaking through. There was some opposition to the establishment of the hospital in Cremona, but eventually the 29th (No. 29) Stationary Hospital arrived there from Salonika on 22 November 1917 and was in full working order by December 1917. The Becker Red Cross Hospital in Turin was also acquired and became ‘B’ section of the 29th Stationary Hospital on 15 April 1918 and additional staff and volunteers recruited to work there.

The men in the Turin cemeteries may have died whilst in transit along the Mediterranean Line of Communication or they may have been evacuated as casualties from the Salonika campaign or elsewhere and been taken off at Turin when they became too ill to complete the journey. In common with many other soldiers of the First World War few of their service records have survived, but by undertaking some research it has been possible to tell some of their stories, which we have compiled in a Book of Remembrance.

Many other soldiers would have been treated at the 29th (B) Stationary Hospital. It is known that not only men travelling along the LoC were treated there, but soldiers convalesced there after treatment in other hospitals closer to the Front. Some nursing and medical staff also convalesced there.