Military nurse in Egypt: the story of Lily Harris 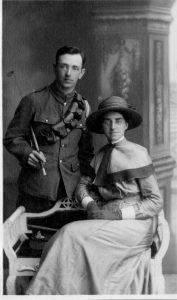 The story of Lily Harris gives us an idea of what life was like for the thousands of women who joined the Queen Alexandra’s Imperial Military Nursing Service Reserve [QAIMNS (R)]. Based for most of the war in Egypt, she will have dealt with a seemingly endless stream of wounded and dying men of many nationalities. This gruelling work is captured in her diaries.

Lily was born on 22 December 1890 in Sowerby Bridge near Halifax, West Yorkshire, to Robert Harris, an iron turner, and his wife Betsy Ann (née Holt). She grew up in Sowerby Bridge with an older sister and brother, Emily and William. Her younger twin brothers, Thomas and Harry, died a few days apart at the age of two, both of scarlet fever.

Lily attended the Bolton Brow Board School in Sowerby Bridge and as a young woman worked in one of Sowerby Bridge’s many cotton mills as a cotton reeler. Shortly after her twenty-first birthday she began her training as a nurse at the Leeds Union Infirmary (also known as the Township of Leeds Infirmary), which was then connected to Leeds Workhouse.

‘Your work is in a noble cause’

Lily’s great-uncle, Thomas H Barron, may have helped her to get her first nursing position, as from a letter he sent to Lily in December 1911, it appears he accompanied her to her interview and he had plenty of words of encouragement for her: ‘Your work is in a noble cause demanding your best efforts. Observe, observe, test your opinions. Truth, fact, seek for. Give time to think upon your daily doings or when in doubt seek and find help in your superiors whom you find you can trust. I think you inherit qualities which employed will land you where you desire and determine to be’. 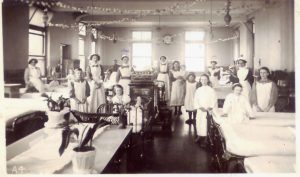 Lily Harris worked at the Leeds Union Infirmary from 30 December 1911 until May 1915. She lived in the infirmary’s onsite nurses home and after completing her training became a staff nurse. A photograph dating from the start of her training shows her working in the nursery ward for girls aged 3 – 12.

Working on a hospital ship 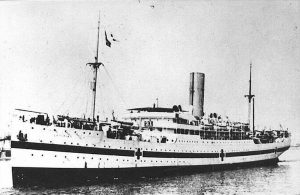 In March 1915 Lily had applied to join the QAIMNS (R) and in May signed up for service ‘for so long as her services are required during the present emergency.’ She set sail from Plymouth on 15 May 1915 going via Malta to Alexandria where her Medal Index Card records her entry into the theatre of war as 13 Nov 1915. Her first posting was to the hospital ship HMHS Letitia, on which she worked until 22 August 1916 caring for the sick and wounded men evacuated from the Balkans campaign (Gallipoli) and taken to hospitals in Alexandria. She left the ship in August 1916 and transferred on 25 August 1916 to the 31st General Hospital in Port Said in Egypt where she spent the next 18 months.

‘Why can’t we have credit for common sense?’ 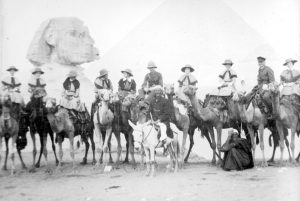 Nurses in Egypt during WW1, believed to include Lily Harris (© Wilkinson Family)

Lily’s diary from June 1916 to September 1919, kept in an exercise book, records something of her life at this period. Much of the diary concerns sightseeing trips, social engagements of afternoon tea and playing bridge, and letters sent and received from family back home and references to some of the soldiers for whom she had cared.

There appear to have been some attempts to curb the nurses’ socialising with the soldiers but Lily was not impressed. In November 1916 she wrote, ‘Rules not to go out with N.C.O or men again brought forward with threat to be reported to Miss Oram. Are we women? Why can’t we have credit for common sense and choose our own friends’.

‘All Russians but one an Englishman’ 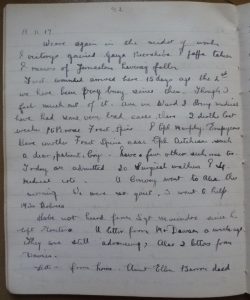 The diary also records details of Lily’s nursing work, such as this entry from January 1917:

‘At dinner Matron came in very excited, said we must all go to wards as the Russian Battleship had been torpedoed just outside and survivors were coming in to us. We rushed off to wards, made all beds and blankets, moved old patients together, prepared hot drinks and hot bottles. Saline prepared. 12 midnight first survivors arrived. We returned to 3 ward. It was still pouring with rain. Soon patients arrived. A long procession of them came racing up the ward bare feet. We helped them into dry clothes, they all looked at their dirty feet before getting in bed but we put them in dirty and gave them hot drinks. The second lot soon arrived similar manner. We fixed them up and left the ward 2 am. Some sisters were on until 5 am. Some patients were badly burnt. All Russians but one an Englishman. We had to find out about them with gestures and signs. I continually pointing to head chest and neck and we managed to fix them’. 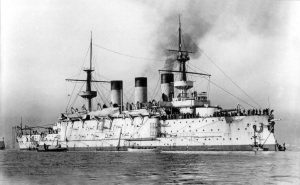 Although Lily may not have known at the time, it seems that this entry in her diary refers to the Russian battleship Peresvet, which ultimately sank after catching fire with the loss of over 100 lives. Lily remarked that she thought about 750 of those 800 on board came to her hospital as patients but some subsequently died.

The diary does not dwell very much on the more difficult aspects of nursing but there are occasional brief entries which hint at the harsh reality of wartime nursing such as, ‘Have been upstairs feeding last two days. It is dreadful to see these poor helpless men. Mashed faces and both hands held up helplessly’ and ‘Have had some very busy nights during the last fortnight. Lost several of my nice boys’.

In February 1918 Lily found herself transferred from 31 General Hospital; briefly to 43 Stationary Hospital and then to 36 Stationary Hospital which at that time was at Mahemdia on the Sinai coast. Whilst there, in August 1918, Lily became an Acting Sister which she recorded briefly in her diary on 22 August, noting that a large number of hospital staff had been taken ill.

Invalided to the UK

The end of the First World War did not immediately mean the end of Lily’s time in the QAIMNS R) and her long service had taken its toll. On 9 June 1919, writing from 36 Stationary Hospital, she requested that she might be released from her contract at the earliest date possible and be allowed to return to the United Kingdom, noting that she had been abroad since 24 May 1915. Her service record shows that in early September 1919 whilst working in Suez on detachment to 76 Casualty Clearing Station, Lily herself became ill and she was transferred to a hospital in Alexandria for treatment. At the end of that month a medical board recommended she be sent to England as she was suffering from anaemia. She was finally invalided to the UK in October 1919 and subsequently found unfit for further military nursing service. Her period of active duty was reckoned as 4 years and 84 days.

A nurse for life 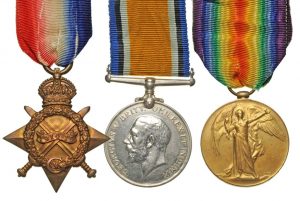 Left to right the 1914-15 Star, the British War Medal and the Allied Victory Medal (Source: Wikipedia)

Lily Harris was awarded the 1914-15 Star and the British War and Victory Medals for her service during the First World War. After returning to the UK she spent some months back home in Sowerby Bridge recovering, but by August 1920 she was well enough to be requesting a testimonial for her service in the QAIMNS (R) so that she might apply for a new position. 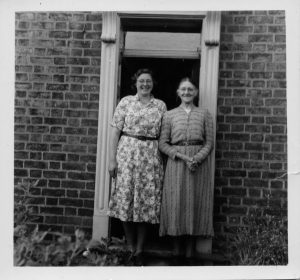 Lily never married and spent the remainder of her working life in the nursing service. She became a registered nurse in 1923 and settled in Hull, East Yorkshire. The 1939 Register records her as a private nurse living in the household of her aunt and uncle, Arthur and Martha (Holt) Beard, back in Sowerby Bridge. Lily Harris died in Hull on 8 October 1982, at the age of 91.

Kirsty F. Wilkinson is Lily Harris’s great-great-niece and a professional genealogist researcher. She hopes to one day transcribe Lily’s diary and to track down the second volume which is believed to be in the possession of another branch of the family.