< A Family Goes to War

To conclude the research project based on the Vicary family of Newton Abbot, Devon, the staff and students of Newton Abbot College developed a drama production exploring the very different stories of the Vicary brothers and sisters in the First World War. The production was performed to an audience of about 200 at the college on 21 November 2018, alongside an abridged production of Shakespeare’s ‘Julius Caesar’, under the general title of ‘Blood and Betrayal’. (Students’ names have been removed to comply with GDPR regulations).

‘Dyrons Boys’ began with a scene in Dyrons House, where two of today’s students had found a box containing diaries and photos of the Vicary family. The students used these to provide a narration, illustrated and expanded by scenes enacted by the rest of the cast. The story began with the family discussing the war, with some of them caught up in the patriotic fervour of 1914, while others were worried and frightened. Each brother’s story was traced and told with pathos and empathy. 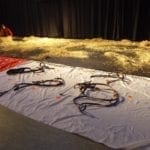 The main theme of the play was the role played by horses, and with clever use of physical theatre techniques, cast members alternated between equine and human roles, capturing the emotional links between man and beast. This is an extract from the script, where two of the horses speak about their feelings. The impressive yet simple set had red and white fabric at the front of the stage, covered with poppies, barbed wire and leather harnesses. Hay was strewn across the rest of the stage. The play was performed by a very talented Year 10 GCSE drama group (14 – 15 year olds), and had been developed by them and their Drama teachers in a short but intense period of just 12 days. It was a profound and very moving performance!

A gallery from the dress rehearsal

Some feedback from the students