Gloucestershire lad in France and Salonika 1915 – 1918: the story of Sapper Arthur Jack Hutt 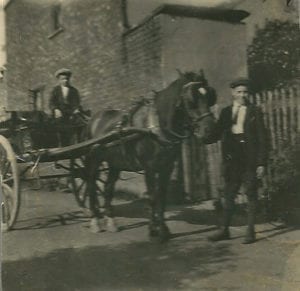 Arthur Jack Hutt was born in Chedworth, Gloucestershire on 17 March, 1898, St Patrick’s Day and thereafter, Arthur was often called Pat. He was the eldest son of Richard Tustain Hutt and Alice Sophia Hutt.  His father, Richard, was a plumber and dairyman. Arthur grew up on the family farm helping his father with the milking and deliveries, before and after school. In 1912, his father was declared bankrupt and with the farm lost, Arthur had to leave school to join his father in the plumbing trade. 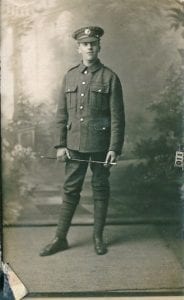 On 4 August 1914, Great Britain declared war on Germany and on 25 November 1914, Arthur enlisted in Cheltenham for service in the First World War. Working with his father in the plumbing trade since 1912, he had learned a good deal of useful practical skills. These skills enabled him to take a trade test to join the Royal Engineers, which he passed convincingly.

Like many others at the time, Arthur was, officially, too young to fight, which is why his army ‘Soldiers’ Small Book’ from that time puts him at an age of 19. In reality, he was just 16 years and 8 months old. He is described in the ‘Small Book’, as having a ‘fresh’ complexion, brown hair and brown eyes and a height of just less than 5 feet and 7 inches.

Perhaps, with the farm having been lost in 1912, Arthur had experienced some personal hardship and disappointment about his future; or perhaps the patriotic fervour to enlist bore heavily on him – or excited him. Whatever his motive, in May 1915, at the age of 17, after a period of training at the barracks in Chatham, Kent, he left for the Western Front.  He left England via Southampton on the RMS Connaught, a steam-powered mail ship, pressed into service as a troop carrier. He arrived in France at Rouen, probably via Le Havre. According to his Medal Index Card he landed on 26 May 1915. Already by 1915, Rouen was a major British and Commonwealth logistics centre and Infantry Base Depot.

On 4 June 1915, Arthur joined 17th Field Company, Royal Engineers and for the next few months Arthur served on the Western Front in the area around Armentieres, remaining there until September 1915. Arthur records the death of a sergeant on 29 August 1915. The company diary confirms this. A shell landed near to the company billets, killing Sergeant Major Armour (No 27907) and wounding Sapper Ford (No 25745). The death of Sgt Major Armour is the only individual and the only fatality mentioned in Arthur’s diary notes. The loss of the Company Sergeant Major no doubt had an effect on all the men in the company but perhaps even more so on Arthur, still a youth of just 17 years.

Arthur undoubtedly saw and experienced the personal impact of war. In one of the few memories he shared with his son Richard, he told of marching to the front in France and seeing a soldier sitting perfectly still, apparently just pausing in the act of bandaging his arm. The only tell-tale sign that he was dead was a sniper’s bullet hole in his forehead.

From France to Salonika

By the end of 1915, Arthur was on the move with the 17th Field Company, Royal Engineers as they prepared to leave France. On 10 January 1916, they embarked at Marseille on the SS Kingstonian and headed to Greece to take part in the Salonika (or Macedonian) campaign. On the 18 January, the ship berthed in Mudros Bay, on the island of Lemnos, before arrival and disembarkation in Salonika on the 20 January. The company then marched to Karaissi, just north of the city of Thessaloniki.

By the 29 January 1916, the 17th Field Company, Royal Engineers was ready to march over 40 miles across the difficult terrain to Stavros. It was a hard march and, as Arthur notes, they spent two nights camped on the road at night. It is also one of the few war memories that Arthur told his son Richard about.

After the cold and damp of a Salonika winter, spring brought welcome warm weather. Unfortunately, this soon turned to unbearable heat and a vast mosquito population.

By summer 1916, the threat of a Bulgarian attack had receded and at the end of July the company moved HQ to Neohori Bridge, making camp, as Arthur notes, by the side of the River Struma.

Unsurprisingly, in the summer of 1916, Arthur, like many soldiers, fell ill with malaria, a constant and serious blight throughout the Salonika campaign. Sent to Malta for treatment on 16 August 1916, he embarked on HMHS Grantully Castle, a former troopship in the Dardanelles which had been recommissioned as a hospital ship with 552 beds. Arriving in Malta on 25 August 1916, Arthur was just one of many thousands of men who were sent there for treatment. He spent five months on the island, initially being treated at St George’s Hospital, Malta, and convalescing at Ghajn Tuffieha Convalescent Camp.

He then spent a few weeks at All Saints Convalescent Camp, arriving there on 8 January 1917 and where he may have felt at home working at more familiar tasks. Each camp grew its own vegetables, kept chickens and had various trade workshops, which raised money for the camp by the selling their wares.

Back to the Front

By 21 January 1917, Arthur had recovered sufficiently to return to Salonika a few days later on the ship HMS Minnetonka. However, there may have been another reason for his return. A family story tells that Arthur was court martialled in Malta for fighting members of a rival regiment – for which he was not penalised as long as he agreed to return to the front line.

Back in Salonika in January 1917, Arthur was sent to Summer Hill, a large tented camp. It became a terrifying place in February that year when he was lucky to survive an air raid by the German Kagohl 1 bomber squadron. Arthur refers to it in his notes as a ‘big air raid’. The raid caused over 300 casualties. Arthur left Summer Hill on the 19 March 1917 and journeyed to Stavros where he ‘crossed the bay’  to company headquarters in the Neohori district, right at the very eastern end of the British front line. 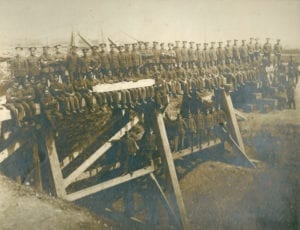 One of the family photos that gives a clue to Arthur’s work at that time is a group shot of engineers on a bridge that they had just built. The sign held by the sappers in the photo says that the bridge was built by ‘215 Group’. Arthur is in the bottom row of men, the last on the right. He has his back to a stanchion with his hand on his outstretched left leg.

In April 1917, Arthur’s malaria returned, but this time, because of the German U-Boat threat, he was sent to a hospital in Salonika where the Maltese hospitals had been relocated. The sea journey to Malta had become too hazardous.

On 4 August 1917, Arthur returned to Tasli where the company HQ had relocated, leaving on the 18 August when he was attached to 80th Brigade. Details of his activities during the autumn months are not known, but in December 1917 Arthur notes that he ‘had mules to look after’  for a few weeks. This was an important task as the roads were poor in a difficult terrain and mules provided an essential means of transport. They were vital to the Allied effort in Salonika.

On New Year’s Day 1918 Arthur was attached to 99 Brigade Royal Field Artillery, 22nd Division, but the precise nature of his work is not known. Arthur was with the artillery for three months before returning to company HQ, now at Marian. 1918 was a bad year for Arthur’s health. Between postings to different locations, malaria returned with increasing severity and he was hospitalised twice. Eventually, too sick from malaria to continue in Salonika, in September 1918 he was put on the ‘Y Scheme’ – an arrangement intended to remove infected men from malarial areas but not to remove the men from service altogether.

Arthur finally left Salonika in early December 1918. On 19 November, Arthur went to embarkation camp, leaving there on 27 November. On 6 December he entrained at Oriental Station to leave Salonika, via Bralo and left there on 10 December 1918.

At that time men were being evacuated along the Mediterranean Line of Communication, as happened with most of the Turin Men and it is likely that Arthur also travelled along this route through Italy on his way home to England.

By the spring of 1919 Arthur had recovered sufficiently to continue in service with the Royal Engineers as a Lance Corporal with No 1 Group Depot Royal Engineers, Chatham. It was about this time that he met his future wife, Florence and later in 1919, Arthur became a Non-Commissioned Officer (NCO) of the officers’ mess at St Mary’s Barracks, Chatham. Arthur was still in army when he and Florence married on 14 February, 1920 in Rochester, Kent. 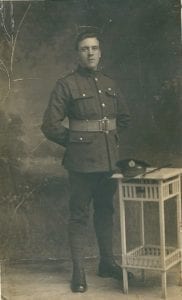 In November 1920, Arthur left the army. A testimonial written on 28 October 1920 by Lieutenant Rushbridge, secretary of the mess, described Arthur as his ‘right hand NCO’, ‘sober and trustworthy’, and he said that ‘Hutt deserves to do well’. But, according to family stories, Arthur was not always a model soldier! The story goes that he was court martialled twice. In addition to the story of his misdemeanour in Malta, he is also thought to have been court-martialled for a second time after going absent without leave in a village in Salonika on the hunt for locally brewed alcohol. The military police believed it was him but his tent corporal gave him a good alibi and he was acquitted. 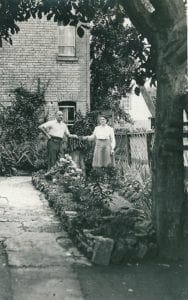 Arthur and Florence went on to have four children, eventually settling in Cambridgeshire. Arthur was discharged from the army in November 1920 and he transferred to the reserves until his discharge on 24 November, 1926. As a reservist, he was called up during the General Strike of 1926. In the Second World War, Arthur’s experience in the Great War, his NCO rank, and his bearing made him a natural choice, initially as an air raid warden, then a corporal, and later a sergeant in the Home Guard. Florence died on the 4 June 1974 and was buried in Little Shelford, Cambridgeshire. Arthur died four years later, at the age of 80 and is buried alongside Florence.

Arthur’s story has been researched by his grandson, Andy Hutt. Andy was inspired when, in 2017, his father Richard, gave him some pages of notes written by his grandfather describing his service in the First World War. Andy says, ‘It has proved to be an absorbing and rewarding experience, not least for the impact it has had on my father who says he now feels closer to his father as a result’.

Arthur’s handwritten notes and a much fuller account of Andy’s research can be found at: http://ajhutt.wordpress.com