The Gallipoli Campaign was conceived as a naval action. It started with a naval bombardment of the forts protecting the Dardanelles Strait in November 1914 and February 1915, followed by an unsuccessful attempt in March 1915 by the British and French navies to force the Strait, which had been heavily mined by the Ottoman Turks. On 25 April 1915 a large multinational force was landed on the Gallipoli peninsula, with the aim of taking control of the Strait by knocking out the Turkish forts guarding them, but the Turks held the high ground and prevented any further advance inland. The Campaign turned into a stalemate of trench warfare, as on the Western Front. Even with a further attempt in August 1915, Allied forces never broke through and after nine months they evacuated the Peninsula. It had been a costly failure. How did that happen? 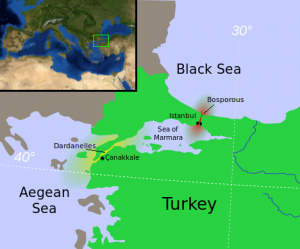 The Dardanelles and the Bosphorus were Russia’s only sea route to the Mediterranean (Source: Wikipedia)

By the end of 1914 it looked like the Western Front was deadlocked, while on the Eastern Front the German army had soundly defeated Russia at Tannenberg. Politicians started looking for other ways to win the war. The Dardanelles Strait, along with the Bosphorus, are pinch points in the sea route which Russia needed to use if it was to link up with its French and British allies. The Ottoman Empire had sided with the Central Powers (Germany and Austria-Hungary), blocking this sea route, and also potentially opening up a land route for Germany to gain access to the oil-rich Middle East, and to threaten India. Cutting the Ottoman Empire off from its European allies – and taking Constantinople – while opening up a sea route to develop better coordination between the Entente allies, seemed a good idea to Winston Churchill, then First Lord of the Admiralty. However it turned out to be wildly ambitious and most historians believe it was doomed from the start. 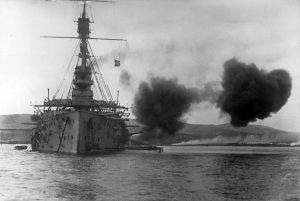 HMS Cornwallis in action at the Dardanelles (© AWM H10388)

‘Britannia ruled the waves’ in 1915, so part of the misplaced optimism was hubris. Churchill thought the navy would carry all before it. However the naval high command saw the gravest threat in the North Sea, where the recently modernised German fleet was beginning to flex its muscles. Most of the warships sent to the Dardanelles were old, with a group of fishing trawlers assigned to the minesweeping. There was only one dreadnought – the brand new HMS Queen Elizabeth, whose 15” guns had a range of 20 miles. When the British and French ships sailed into the Dardanelles on 18 March 1915 three were sunk and two badly damaged, with huge loss of life. It was decided that a land attack was needed.

Here another fatal flaw on the Gallipoli Campaign raised its head – indecision. General Sir Ian Hamilton, Commander of the Mediterranean Expeditionary Force, waited six weeks before launching the Gallipoli landings. This allowed the German-led Ottoman army to dig in on the tops of the hills overlooking the beaches. When the landings finally happened on 25 April 1915, the Allied troops were pinned down and cut to pieces. There were three main landing areas: the main British forces landed at Helles on the west side of the entrance to the Strait, the French landed on the Asian shore in a feint attack, while five miles further north of the British landings the ANZACs found themselves at the bottom of a sloping cliff and although the first men managed to scale the heights they were soon driven back by the Turks under the command of Mustafa Kemal, later to become ‘Atatürk’, the new republic’s first President. In this moment of despair for the Allied troops there came an unexpected report of success: an Allied submarine had got through the Dardanelles and attacked Turkish troop ships in the Sea of Marmara. Just when the British generals were ready to call off the whole attack, General Hamilton, encouraged by the news of the submarine, told them, ‘You have got through the difficult business, now you have only to dig, dig, dig until you are safe’. They dug in.

Visiting Gallipoli today, you can still walk along the trenches, go into the bunkers and find bullets, cartridge cases and fragments of rum jar along the front where the Allied troops were held by the Turks for eight more months. Although there were pushes and battles, the trench lines barely moved. Meanwhile during the heat of summer, disease and dysentery set in, debilitating the downhearted soldiers. In November 1915, an unexpected storm flooded the trenches, followed by a blizzard; 200 died and 15,000 were injured.

The breakout and Suvla landings

The only major effort to change the situation came in August 1915, when additional regiments arrived from Britain – albeit mainly raw recruits from Kitchener’s New Armies – and Hamilton attempted a flanking action in the north of the Peninsula. While the ANZACs broke out of their trenches in the hills, the idea was that the new forces would land at Suvla Bay and move inland across lower ground, taking the Turks from behind. Again, leadership failed. Lieutenant General Stopford, in command of the barely-opposed Suvla landings, faltered, allowing the Turks to reinforce their lines and hold back the advance. Effectively, that was the end of the Campaign. 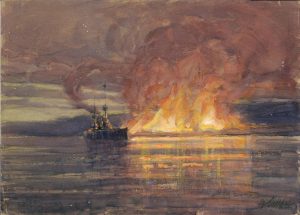 In October 1915, General Sir Ian Hamilton was relieved of his post and General Sir Charles Monro took over, with the brief to draw the Campaign to a close. The evacuation was perhaps the most successful element of the Gallipoli Campaign; the whole Allied force of 150,000 men was withdrawn under the noses of the Turks and completed in early January, 1916. Many of the troops returned to military bases in Egypt and were then sent to Salonika and the Middle Eastern campaigns.

The legacy of Gallipoli

As a direct result of the Gallipoli fiasco Winston Churchill lost his job and left Parliament to fight on the Western Front. Britain’s pride was dented, but valuable lessons were learnt about amphibious landings, joint-service campaigns (it was the only campaign in the war combining forces on land, sea and air), ‘bite and hold’ techniques in trench warfare, and the selection of generals by ‘Buggins’ Turn’.

For Australia, Gallipoli has become a founding myth. It was the first time her soldiers had fought in a major action and Australians take pride in the part their men played, doing their best despite the inept leadership. 25 April is commemorated as Australia’s Remembrance Day, and every year thousands of Australians and New Zealanders make the trip to Gallipoli to attend the Dawn Service at Anzac Cove where their troops landed. 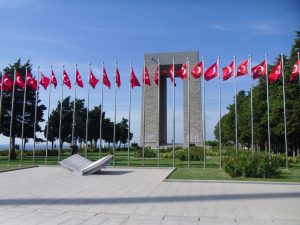 Similarly Turks look back at Gallipoli as a founding event for the new republic. By repelling the invasion they regained some of the pride they had lost in the Balkan wars of 1912 – 1913, and in their setbacks in the Caucasus against the Russians. Although not the overall leader, Mustafa Kemal was a hero of Gallipoli, a role which helped foster his reputation and led to him becoming the first president of the new republic in 1923.

It is largely due to the interest shown by the Australians and Turks that Gallipoli has been remembered and studied. In Britain – and especially in France – people have preferred to forget this debacle. The result of this is that history has been rewritten: modern Turkish interpretations portray Gallipoli as a victory for Islam, while due to the mythic value placed on the campaign by Australia, the role of the ANZACs has been promoted, making it appear that there were more Australians there than Britons, when the opposite was the case.

What if the Allies had won? Would the Ottoman Empire have dropped out of the war, releasing British troops tied up for years in the Middle East? Would Russia have had more success, perhaps preventing the unrest which led to the Revolution? Would the war itself have ended sooner, saving thousands of lives? Who knows?