China and the First World War

Today China is a global superpower, rarely out of the news, yet a century ago it was weak, and at the mercy of imperial powers vying for access to its huge material resources and population. The First World War saw China’s interests ignored by Europe and Japan, and the shame associated with this led to distrust of foreign intervention in the 20th century. 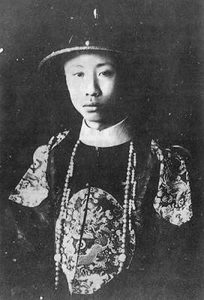 China in the second decade of the 20th Century was going through a major political and cultural crisis. In 1912, the last Manchu Emperor, Pu-yi, abdicated (aged three years old) and was replaced by a Republican political structure. However, within months, separationist activities were happening all over the Empire, led by so-called warlords and rival political and ethnic groupings.

Additionally, China had, since the 1840s (and earlier), experienced fierce interventions by other powers, including France, Britain, the United States, Germany and – most recently – Japan. This had resulted in a mixture of foreign controlled territories, foreign administered cities and foreign imposed civil servants.

When, in August 1914, the First World War started, the north of China was controlled by a former militarist, Yuan Shi-k’ai, who was to attempt to be crowned Emperor, but who failed and subsequently died in 1916. He was succeeded by a body of competing individuals in Beijing, while a separate body held power in the South.

The siege of Tsingtao 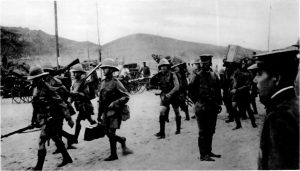 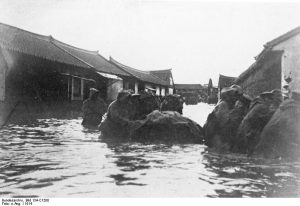 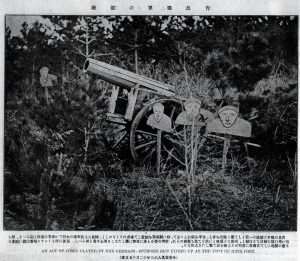 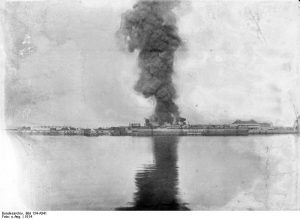 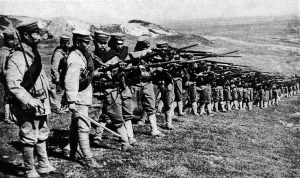 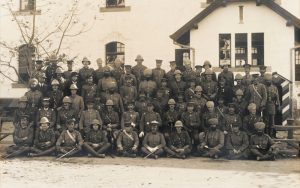 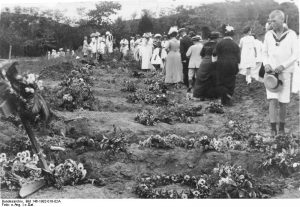 Within days of the war being declared and Japan joining the Western Allied nations, both China and other powers sought to reclaim the German administered treaty port of Tsingtao (Qingdao today). The Chinese offered 50,000 troops to help an allied push into the territory, which was ignored. Instead the Japanese sent a 23,000-strong army (crossing Chinese territory to avoid the German shore-based defences), supported (or perhaps ‘monitored’) by 1,000 British troops from the South Wales Borderers and 500 Indian Army soldiers of the 36th Sikhs. The combined Japanese-British-Indian force took over the port, its hinterland and its access to coal supplies after a siege, in November 1914.

The Chinese, being anxious to obtain funds from the Allies, especially the Japanese, did little more than protest.

One major consequence of the fall of Tsingtao was the departure of the German warships that had been based there. Of these, the Emden, escaped into the Indian Ocean, where it successfully attacked more than twenty commercial and naval vessels, including two warships, severely interrupting Indo-British trade before being defeated off Zanzibar by HMAS Sydney. Curiously no Japanese vessels were attacked.

The Beijing government encouraged Britain and France in their recruitment of labourers. In all about 140,000 went to the Western Front as part of the Chinese Labour Corps, of whom about 3,500 were killed. In addition, up to 6,000 Chinese labourers were recruited separately and sent to Basra to help assemble 200 ships made in Britain and sent out to support the Mesopotamia Campaign, which relied on river transport to supply the troops. Russia also recruited Chinese labour during this period. Of the 200,000 sent there, half were still there, working for the various opposing parties, well into the 1920s.

Although the Chinese government made offers of troops on more than one occasion, these were never accepted and the government began to worry that China might be sidelined in any post-war peace settlement. On 14 August 1917, China declared war against Germany, probably hoping that this would ensure a positive outcome after the war. On the same day, British civil servants, working for the Chinese Maritime Customs, were careful to ensure that the German ships moored in Chinese ports were boarded before any scuttling could take place.

Over the next eighteen months, China made further offers of assistance, but these were not accepted either, partly because the Allies had conflicting aspirations and partly because there was some doubt as to the practicality of such offers.

The Chinese Governments in Beijing and Canton sent a delegation to the Versailles Peace Conference, but they were largely ignored and their request for the return of Tsingtao and other foreign concessions stymied by differences between the Allies. This treatment has soured Chinese attitudes to the West ever since.