Iraq did not exist in 1914. Mesopotamia is a geographical expression meaning ‘the Land between Two Rivers’ which refers to southern Iraq between the Tigris and Euphrates rivers. Modern Iraq was created from three provinces (vilayets) of the Ottoman (Turkish) Empire – Basra, Baghdad and Mosul. 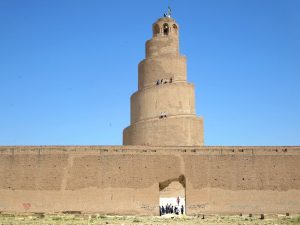 Mesopotamia is steeped in history. This is the Spiral Minaret at Samarra (© David Stanley 2016)

In 1914, Mesopotamia had been part of the Ottoman Empire for nearly 400 years. It was a military, economic and political backwater but played several important roles. It contained the two Shi’a Muslim holy cities of Najaf and Kerbala which linked it to Persia (Iran) and India. Basra was a significant port: it was Sinbad the Sailor’s home port. Also, Mesopotamia was recognised as being the birthplace of civilization, including Ur, the birthplace of Abraham.

The British in Mesopotamia

British merchants had been trading in the Arabian Gulf since the 1600s. In the 1800s, the British (through the Indian Government) had signed diplomatic treaties with the Gulf sheikhs. British-Indian merchants dominated trade while the Royal Navy conducted anti-piracy, anti-slavery and anti-gunrunning operations. A British company operated a shipping company between Basra and Baghdad, while others investigated irrigating the desert to return the region to the fertile land it had been in the ancient past.

Oil was a key factor in British strategy in the Middle East. This is the Anglo-Persian Oil Company refinery at at Abadan, 1915 © IWM (Q 25656)

In 1908, oil was discovered in Persia by what is today BP. Their oil refinery at Abadan Island sat in the Shatt-al-Arab waterway between Persia and Mesopotamia.

British dominance in the region was challenged from the 1890s when Germany started looking at the Ottoman Empire as part of its policy of imperial expansion. German merchants started to trade in the Gulf and they started to build the Berlin-Baghdad Railway which would have joined Hamburg to Basra. This would have by-passed the British controlled seaways.

The outbreak of the First World War

Meanwhile, Britain sent the 16th Brigade of the Indian Army to the Gulf. Their instructions were: 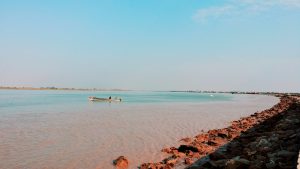 On 29 October 1914, the Ottoman navy attacked the Russian fleet in the Black Sea without warning.  A week later, 16th Brigade conducted the most successful amphibious operation of the war to capture an Ottoman fort on the Al-Fao Peninsula.

The campaign can be divided into six phases: the capture of Basra, the 1915 advance on Baghdad, the siege of Kut, rebuilding the army, the 1917 capture of Baghdad and the campaigns beyond Baghdad. It would have been a highly successful campaign except for one phase, the Siege of Kut, which was Britain’s worst disaster of the war. It included the most successful British advance of the war and numerous men who would become famous – Bill Slim, Clement Attlee, Percy Hobart, Claude Auchinleck to name a few.

The British Army in Mesopotamia would grow to about 440,000 men. Most of those who did the fighting were from the Indian Army (roughly 75% Indian and 25% British) but, unfortunately, there are no Indian memoirs from the First World War.

After the successful Al-Fao landing, 16th Brigade was joined by the rest of 6th (Poona) Division of the Indian Army. They captured Basra and then fanned out to Shaiba and Qurna (reputedly the Garden of Eden) to provide ‘defence in depth’. By the end of 1914, Basra was secured and Abadan Island was protected.

An Ottoman attack on Shaiba was repulsed in April 1915. This was the last battle fought by the British Army without aircraft support. It was considered one of the most important battles of the war: had the British been defeated, they would have been forced out of the Arabian Gulf.

They had achieved their main objective.

6th (Poona) Division under Major-General Townshend was given the task of breaking out from Qurna to capture Kut Al-Amara. It was argued that this town was closer to the oilfields so its capture was necessary for their protection.

Townshend was given an impossible task. The desert around Qurna was flooded – this is the land of the Biblical flood – and the Ottoman defenders had all winter to dig into islands in the floods. The infantry had to attack in canoes while the Navy did not know where the deep water was and didn’t want to run aground.

The attackers were nicknamed ‘Townshend’s Regatta’ because of the large number of boats needed to cover the marshes. They launched a highly successful attack and then continued up the river to Kut Al-Amara. In three days they advanced 85 miles, captured the town and 2500 prisoners all for 30 British casualties. 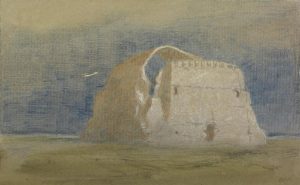 Ancient and modern. The Arch of Ctesiphon, with an RNAS Seaplane © IWM (ART 2439)

In the autumn the advance resumed. Townshend fought and won a series of battles but on each occasion, he just failed to capture the Ottoman Army who withdrew to fight again. The final battle, at Ctesiphon, was fought over 22 November – 25 November 1915. It was too much for Townshend’s force. The battle was just 16 miles from Baghdad but they had marched 400 miles from Basra. The battle was inconclusive, but the Ottomans were nearer to their base in Baghdad. Townshend was in trouble. It took weeks to get his wounded to the main hospital in Basra. This led to a scandal and a Parliamentary inquiry. Townshend ordered a withdrawal to his nearest base at Kut, 40 miles away. 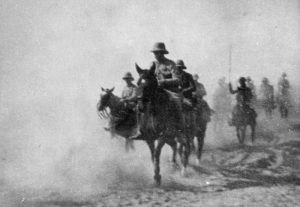 General Townshend and his men entered Kut in a state of exhaustion. Some troops were able to continue their way south before the Ottoman Army laid siege at the beginning of December 1915. The Ottoman Army made one attempt to storm the city, at Christmas 1915, which failed. Thereafter their policy was to dig in further down the River Tigris to block the British Army’s relief effort until Townshend was starved into submission.

The multicultural nature of the British and Indian soldiers in Kut complicated feeding troops under siege conditions. As different food types were used up at different rates, dispensation from different religious leaders in India was obtained for their followers to eat foods which they were normally forbidden to eat. 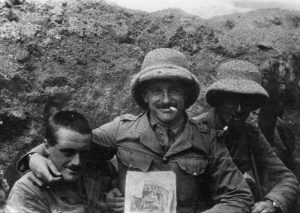 Two Indian divisions were sent from the Western Front (3rd (Lahore) and 7th (Meerut)). The British 13th (Western) Division had just been evacuated from Gallipoli and was refitting in Egypt when it too was sent to relieve Kut. These arrived in Basra and were then sent piecemeal to the front line because of a lack of transport. The winter fighting conditions were amongst the worst of the war. Temperatures fell below freezing, the Tigris burst its banks and flooded the trenches while huge shallow lakes in the desert moved as the wind direction changed. The mud was glutinous which jammed weapons.

Despite many valiant, and often successful attacks, the British Army failed to reach Kut. On 29 April 1916, after 147 days, the garrison surrendered. It was the longest siege in British Army history and the worst defeat for the British Army since Yorktown in 1781 which led to the independence of the United States of America, and would only be exceeded by the surrender of Singapore in 1942.

Coming so soon after the Allied failure at Gallipoli (the last troops were evacuated in January 1916) it was feared that defeat at Kut would undermine British prestige in Asia and bring down the Empire. It did not, and the extent of the disaster was soon overshadowed on 1 July 1916 when the Battle of the Somme started. The treatment of the British and Indian prisoners of war was harsh in the extreme and was similar to the treatment received by Allied prisoners of war at the hands of the Japanese in the Second World War. Prisoners laboured to build a railway through the mountains of Turkey. General Townshend, however, lived in luxurious captivity in Istanbul while his men suffered; his reputation was destroyed.

In the aftermath of Kut, many generals were sacked and a Parliamentary inquiry was launched into the disaster.

The new commander was General Maude. He had commanded the 13th Division at Gallipoli and in the Relief of Kut. He set about rebuilding the army. Fortunately some reforms had already been started. Railways were laid with track, engines and rolling stock from India and Britain. More river steamers arrived and the Royal Navy received more and better gunboats. Lorries started to replace animals for transport. More and better aircraft and equipment started to arrive; they started the first effective mapping of Iraq. The port of Basra was expanded and banks were built to hold back the floodwaters. Over 40,000 men were employed on the waterways, including a battalion of West Indian soldiers.

While all of this was happening, the soldiers in the front line suffered in the summer heat – over 50oC at midday – and lived on minimal rations because all of the transport was given over to preparing for the future campaign. Unlike on the Western Front, where the soldiers were rotated out of the front lines and could relax in French or Belgian villages, there was nothing like that in Mesopotamia. 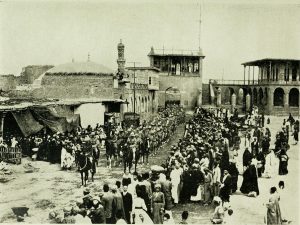 General Maude launched his offensive in December 1916. A diversionary attack on Kut fixed the Ottoman Army there while the majority of Maude’s force advanced through the desert on the opposite side of the Tigris. Maude planned to cross the Tigris above Kut to capture the Ottoman Army. Strong Ottoman resistance held up the crossing of the Tigris and most of the Ottoman Army escaped. The British captured Kut for a second time in just over a year.

The Ottomans made their final defence of Baghdad on the Diyala river. In March 1917, the ‘Lancashire Brigade’ of 13th Division made three attempts to cross the Diyala river and won two Victoria Crosses.

General Maude captured Baghdad on 11 March 1917. It was the most peaceful capture of Baghdad in its long and bloody history. By controlling the Berlin to Baghdad Railway, German plans to control Mesopotamia were over. The pressure was off.

Beyond Baghdad, the rivers split into three directions:

Fighting on the Diyala river was important to meet up with Russian forces operating in Persia. Germany sent agents through Baghdad across Persia to Afghanistan to persuade the Afghans to launch a jihad into India. This would have required British troops to leave the Western Front to go to India, so there would have been fewer British troops for the Germans to fight. However the Russians soon left Persia because of the Russian Revolution. 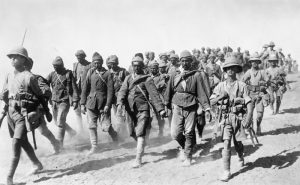 The Euphrates advance included the Second Battle of Ramadi which was a nearly perfect battle.  Ottoman forces in Syria were preparing to recover Baghdad but when General Allenby broke through the Ottoman defences in the Palestine Campaign, the Ottoman forces were directed against Allenby and the threat to Baghdad ended. 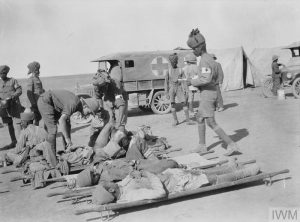 A Royal Army Medical Corps officer with wounded Turks and Indian staff at an advanced dressing station after the action at Tikrit, 1917 © IWM (Q 24440)

The Tigris continues into Turkey and the British Army pursued the Ottoman Army northwards. On 30 October 1918 an Armistice was signed between the Ottoman Turks and the Allies. Nevertheless the British forces continued their advance to Mosul, occupying it two weeks later and adding the oil-rich region to the area under their control, amidst Turkish protests.

The Campaign was over, but Iraq’s troubles were to continue for many years post-war.