With the Remounts: the story of Private John Staple

Between 1914 and 1918 Britain’s war effort was very dependent on its horses. At the start of the war, horse power was still a key method of moving the army and its supplies. Even though motorised transport was becoming more reliable, trench warfare meant that provisions had to be brought in from a distance and very often over ground that was unsuitable for other means of transport so there was an urgent demand for large numbers of horses, mules and other animals. The Army Remount Department was responsible for the purchase, training and care of horses and mules. These units were part of the Army Service Corps and its soldiers performed a service vital to the war effort. Private John Staple of Taunton, Somerset was one of those men.

John Staple was born in Taunton on 13 October 1880, the youngest child of John and Elizabeth Staple. John’s siblings were William, Henry and Elizabeth and in 1881 the family lived at 10, Melody Building, Taunton, Somerset, England. John had several half-siblings from his father’s first marriage. John’s father was a Coal Boat Discharger when younger and a Coal Labourer in the 1881 census. The family report that at some point he also worked as a Lock Keeper on the Taunton-Bridgwater canal. He died in February 1900. 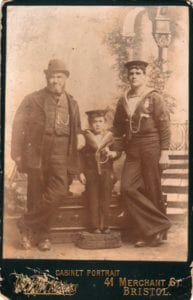 John’s brother, William John Staple was born in 1872 and he too saw service in the First World War. His career was in the Navy, in which as a boy entrant in 1887 he had served all over the world until 1902 when he retired to become a Coastguard. He was recalled to the Navy in 1914 when war was declared and served as Chief Petty Officer on HMT Agamemnon II, a former Grimsby trawler converted to a minesweeper. Tragically William was killed in 1915 during a mine-clearing operation off Harwich when the ship was blown up and sunk with the loss of 9 of the crew.

In 1901, John was known to be living in Glamorganshire, Wales, one of several men boarding with a family who were all employed in the coal mines. John’s occupation was a Colliery Worker (Below), which meant that he worked underground in the mines. By 1911, John had returned to Somerset where he married Rosalind Singleton in August that year. They lived in Taunton and at that time, John was a telegraph wire man, working on the Great Western Railway. In 1912, John and Rosalind’s first child, a boy, also named John was born, a daughter Phyllis Mary in 1914, their second son William Singleton in 1915 and Henry Robinson in 1916.

Unfortunately, John’s First World War service records have not survived, so it is not known exactly when he enlisted but he joined the Army Service Corps and was then assigned to a Remount section. This is recorded on his Medal Index Card where his regimental number has the prefix R4 (R4/140664). It seems most likely that he volunteered for service in 1915, possibly as a result of Lord Derby’s recruitment scheme, but without his attestation papers it is not possible to be certain. According to the ‘The Long, Long Trail’  the prefixes ‘R4 and RX4 are less clear but may relate to the compulsory transfer in 1916 of men who were serving in ASC units of the Territorial Force on to regular army terms’. John was still in the UK during part of 1916 as his youngest child was born in December 1916, although he may have been mobilised before the birth of his third son.

There is a copy of a Return collected by Taunton Borough Council, of all Taunton residents who had served in the war and John’s regimental information on that is consistent with his Medal Index Card.

According to the Taunton Return he served ‘8 months in the UK’, which would have included a period of training, before leaving to serve overseas during which time he was in ‘Egypt for 6 months’, and then transferred to serve in ‘Salonika for 2 years and 6 months’.

Despite the lack of confirmed information in the form of military records, John left a lovely selection of photographs which can be used to illustrate his journey through the war. Without his service records it cannot be confirmed that he was with the same Remount units in both Egypt and Salonika, but the Taunton Absent Voters List for 1918 shows that he was with the 43rd Remount Squadron. According to the Australian Imperial Force October 1916 war diary of the General Staff, General Headquarters of the Mediterranean Expeditionary Force (entitled Egyptian on cover page), this Remount Squadron was transferred from Egypt to Salonika during October 1916, so we can surmise that John was in Egypt from May – October 1916 and then he served in Salonika (for 2 years and 6 months).

If the Taunton records are correct it appears that he may not have returned home until 1919. John left a photograph of himself and a colleague taken with Constantinople as a backdrop and the photo clearly shows a studio name from that city. Although the Armistice of Salonika came into force at the end of September 1918, this wasn’t necessarily the end of the war for all the British troops in that campaign. The ceasefire with Bulgaria was used to send part of the British Salonika Force to advance on Turkey, but the Mudros Armistice was agreed and signed before many the troops had neared Constantinople. However, it is known that some men who had served in Salonika did go to Constantinople either overland or by sea. We cannot be certain, but the photograph does seem to show that John did visit the city and may have returned home from there in 1919, which would concur with the length of his service as recorded by Taunton.

After the war, John worked in a variety of manual worker jobs until he retired. He suffered from some hearing loss and put this down to his war service. He specialised in well digging and reported that he could hear things much better when he was down a well! This would probably be to do with the way wells channelled and amplified the sounds. He died on 13 June 1953. John’s family have his collection of trench art, which it is understood he brought back from his service overseas. He was obviously very fond of these items as they have survived.

With thanks to Simon and Christine Briggs for supplying details of John’s story and for copies of the photographs. Simon has been researching his family history and that of his wife since 2012 and he says that he, ‘has still got a long way to go’! His wife, Christine is John Staple’s granddaughter. With some additional research, John’s story has been compiled by Lyn Edmonds, ‘Away from the Western Front’ Project Lead.

Our  Horses in the War project investigated the role that equines played in the war, not just as draught horses and cavalry chargers but as companions for the soldiers they supported.