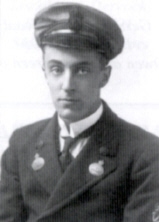 In its early days, flying must have been a terrifying experience, in flimsy canvas-covered wooden planes with unreliable engines and primitive instruments. In war, pilots also fired guns and dropped bombs from their cockpits, and had to evade enemy planes. The story of Lt Joe Bamford gives an idea of what it might have been like.

When Joe’s great nephew Gavin Bamford started to look into his great uncle’s war records he did not expect to find a hero, but Joe certainly fitted the description of an ‘ace’. 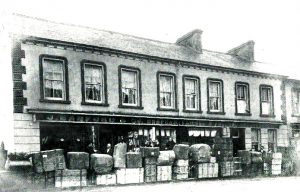 Joseph Lamont Bamford was born in Kilrea in Northern Ireland on 5 January 1894. The Bamfords were a well known family in the Kilrea and Garvagh areas, and still are today. Before the war Joe worked for the automobile engineers, Messrs J B Ferguson Ltd, Chichester Street, Belfast. His mechanical skills proved useful and on enlistment in December 1914 he was posted to Commander Locker-Lampson’s RNAS Armoured Car Squadron and served with that unit in France and Belgium.  According to his military papers he was 5′ 8½” in height, with a chest of 36″, brown hair, grey eyes and a fresh complexion.

The following year Joe gained a commission in the Royal Scots Fusiliers and was later transferred to the General List for service in the Royal Flying Corps (RFC).  He gained his ‘wings’ in August 1915.  During 1916 he served with 5 Reserve Squadron, RFC in Warwickshire.  Promotion to Lieutenant came in August 1917.

At this time there was no Royal Air Force as such; the Royal Flying Corps had only been set up in 1912 and was a branch of the army, which explains Joe’s army rank of Lieutenant. The Royal Naval Air Service was the navy’s equivalent and the two corps became the Royal Air Force in 1918. At the start of the war RFC aircraft were mainly used for reconnaissance, in support of the army. However as time went on the air became a new theatre of war, with pilots battling it out with their opponents. 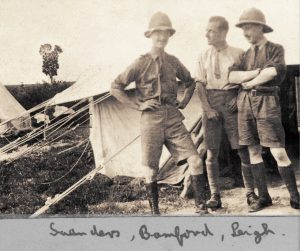 In 1917, Joe was posted to Salonika, Greece.  During his short service there, Joe had a marvellous escape from death through another aeroplane crashing into his at an altitude of 11,000 feet and sending it to earth.  He recuperated in Egypt having, to use his own words, escaped ‘with a view bruises and two splendid black eyes’. The event was later reported in the Coleraine Chronicle. After remarking that in the collision the tail had been cut off his machine, the intrepid young airman describes his thrilling experience thus:

‘I fell like a stone in a spinning nose dive for about 6,000 feet and, having to hold on with both hands, I could not get my engine shut off.  Eventually I managed to do it and the machine then turned upside down and started gliding at a more respectable pace, I being held in by my belt, which did its duty nobly.  I had a vertical gun going straight up above my head (and in this instance it was pointing straight down) which I thought would be better out of the way when I hit, so I undid the fastenings and let it drop overboard. It was a jolly good thing that I did, as the mounts were knocked to bits.  The only control I had was lateral, viz., making one wing go up and the other down, and just before I hit I yanked it right over and I made the right wing strike the ground first, breaking the fall considerably.  I was a bit shaken up but was not by any means insensible’.

2nd Lieutenant Bamford adds that the luck which he had could be judged from the fact that the only thing on the machine worth saving after the crash were two instruments.  He hoped soon to be back at the aerodrome, as he felt none the worse for his experience, which had not hurt his nerves a bit.  The fellow in the other machine was all right, his plane having escaped with slight damage.  They shook hands afterwards and congratulated each other that their respective Guardian Angels were abroad.  On the day before the accident, 2nd Lieutenant Bamford drove a Hun airman down in his own lines.

The official accident report is much more laconic. It records that the ‘crash caused the fuselage to break off, went down, spinning nose dive and glided upside down.  Machine finally fell on starboard wing’.

A short while later, on 20 August 1917, Joe was reported as missing, believed killed.  Newspaper reports suggest that there was no doubt about his death. 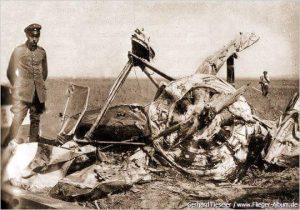 ‘He, together with another pilot, each on single-seater scout machines, escorting a bombing formation to [Prilep].  On the return journey our machines were attacked by a considerably numerical superiority of the enemy.  Your son fought brilliantly for a long time, guarding the rear of the formation, on several occasions helping other of our machines out of extremely tight corners.  In the course of one of his engagements he had obtained position behind an enemy machine and was firing at it, and would undoubtedly have brought it down in a few seconds, when another hostile scout dived on him from a considerable height, firing as he came down.  Your son’s machine was seen immediately to fall completely out of control, giving the impression that its pilot had been killed.  This machine fell thus until it reached ground, and on the morning of the 21st we received confirmation of his death from two captured German aviators.  I cannot say how deeply I sympathise with you in your loss of so fine a son.  He was known to me personally, and apart from his exceptional skill as a pilot and extreme courage, his bright personality and keenness for his work had made him one of the most popular pilots in the squadron.  His loss has been greatly felt and will be for a long time’.

One of Joe’s fellow officers wrote:

‘It is with great grief that I write you about the death of your son.  He was killed in an air fight on 20th August.  He was fighting one Hun when another came up behind, and then, of course, it was all up.  He must have been killed instantly, for his machine came down entirely out of control.  They fought at 12,000 feet, and he fell in the Hun lines.  He has already been avenged, as we brought three of them down yesterday.  He died as I know he would have wished, swiftly and fighting as only brave men can fight.  He was a star pilot and fully recognised as such by his comrades.  I who have lived in a world of men and women would die happy tomorrow did I think that words of regret should be said and spoken of me as they have been of your son.  Spontaneous and whole-hearted as they have been, I have seldom heard their equal.  All of us who knew him extend to you our heartfelt sympathy, for deeply do we feel the loss.  Your son was a cheery and sincere friend and a great and gallant soldier’.

‘We all miss him greatly, as everyone who knew him loved him not only for his gallantry as a pilot, but for his delightful personality.  I feel that I have lost a friend.  It is all too sad that so valuable a life should have been sacrificed, and I do most sincerely grieve for you in this terrible sorrow’.

Buried in a German cemetery 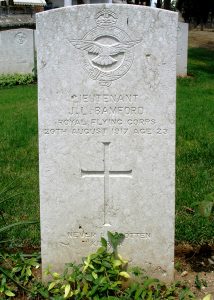 As Joe fell behind enemy lines, he was buried by the Germans in the Topolcani German Cemetery, Macedonia. In 1921, his body was exhumed and reburied in the Salonika (Lembet Road) Military Cemetery, Greece. He is also remembered on the Kilrea War Memorial, the family gravestone in Kilrea First Presbyterian Church and in Balmoral Golf Club, Belfast. 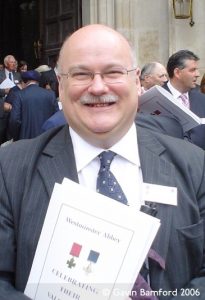 Gavin Bamford joined the Northern Bank in 1974 and later volunteered for service in the TA, transferring into the part-time Ulster Defence Regiment (UDR) serving until 1985. Gavin has researched every one of the nearly 300 men named on the Bank Memorials, including his own father, who had been a manager at the Belfast Bank.  He has undertaken further research on the men of the Ulster Bank who served in the Second World War. Gavin retired in 2013.  He was elected Chairman of History Hub Ulster in 2017 and still lives in Northern Ireland.