This brief chronological summary of events that affected Persia (now Iran), before, during and immediately following the First World War is based on a timeline that was compiled for this project by volunteers from the Iranian Association. 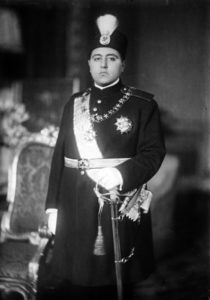 The Persian constitutional revolution sought to replace arbitrary power with law, parliamentary democracy and justice. When Naṣer-e-Din Shah Qajar was assassinated in 1896, the crown passed to his son Moẓaffar-e-Din Shah Qajar, who reigned until 1907. He was forced in 1906 to grant a constitution that called for some curtailment of monarchical power. He was succeeded by his son Moḥammad Ali Shah Qajar, who with the aid of Russia, attempted to rescind the constitution and abolish parliamentary government. He aroused opposition and was deposed in 1909, the throne being taken by his son, Aḥmad Shah Qajar, who reigned until 1925. The occupation of Iran during the First World War by Russian, British, and Ottoman troops was a blow from which Aḥmad Shah Qajar never effectively recovered. 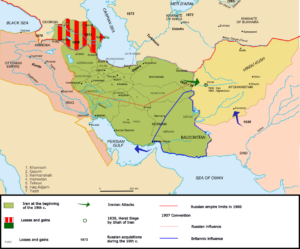 This convention was signed on 31 August 1907. It made a neutral buffer of Tibet, recognized Britain’s interest in Afghanistan and partitioned Persia into spheres of influence: a Russian zone in the north, a British zone in the south and a neutral “buffer” zone in the rest of the country, in which both the British and the Russians shared power. 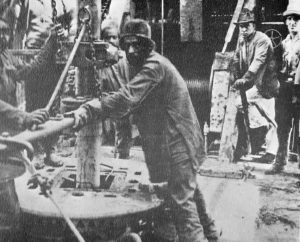 1908 Discovery of oil in Persia

The Anglo-Persian oil company struck oil at Masjid-e-Suleiman in the southwest of modern day Iran.

The British Navy started to switch to oil combustion in 1910, thereby increasing its operating distance and speed. 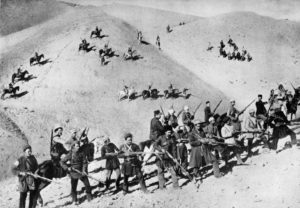 Tabriz defenders in the days before the fall of Tabriz (Source: Wikimedia Commons)

1911 Occupation of Iran by Russia

A rebellion had broken out in Tabriz in north-western Iran on 23 June 1908, and in response to the siege situation there, Britain and Russia agreed that a Russian force should be sent to occupy the city. The Russians occupied Tabriz on 30 April 1909. Negotiations for its withdrawal soon began but dragged on into 1911. On 29 November 1911, the Russian government presented the Persian government with an ultimatum. There were several demands, but the most significant was to fire an American lawyer Morgan Shuster, who had been hired by the Majlis (parliament) to organise the country’s financial affairs. Upon the Persian parliament’s refusal, the Shah dissolved parliament and agreed to the Russian ultimatum. The ultimatum created unrest in Tabriz and on 21 December 1911, militants attacked the Russian troops, inflicting high casualties. In response, a brigade of the Russian Imperial Army was dispatched to Tabriz. Its aim was to occupy three major cities – Tabriz, Anzali and Rasht. The fiercest battle of the Russian invasion occurred in Tabriz, where the constitutionalists resisted. After about three days, the defence of the city broke, the Russians shelled Tabriz with artillery and entered the city on 31 December 1911. The Russians executed the constitutional revolutionaries of Tabriz, their families and many civilians of Tabriz as well. The Russians also destroyed part of the Arg of Tabriz by shelling and a fire broke out there while it was held by Russian troops. The Russian forces remained in the city until 1917.

The Iranian government’s early reaction to the outbreak of the war was to declare Iran’s strict neutrality by royal decree on 1 November 1914. In 1914, the British Indian Army had several units located in the southern influence zone. 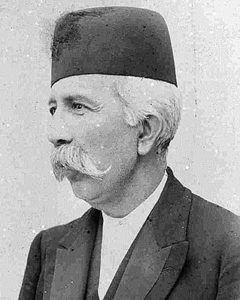 In the absence of a powerful central government in Iran to resist Anglo-Russian dominance, some Iranians concluded that aligning with Germany was the best option to guarantee national sovereignty and territorial integrity. Britain and Russia viewed the activities of some members of the parliament with mistrust and dismay. The situation became so tense that Russian troops began marching to the capital, Tehran. The cabinet of Mostowfi al‑Mamalek considered moving the capital from Tehran to Isfahan. Unable to reach Isfahan, they established themselves in Kermanshah. In 1916, Kermanshah fell to Russian forces, and the Provisional National Government collapsed. 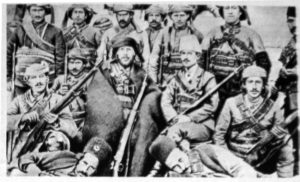 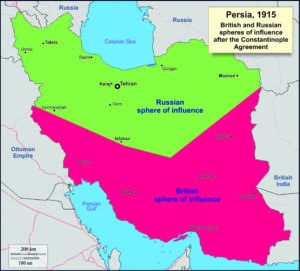 The Anglo-Russian part of the agreement stipulated the division of the whole of Iran into two zones of influence between Russia and Britain. The neutral zone that the Anglo-Russian Entente of 1907 had established in the centre of Iran was to be added to the British Zone of influence, except for the city of Isfahan, which was to be allocated to the Russian zone. 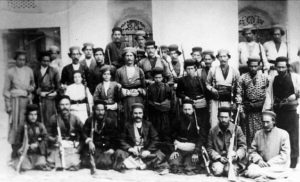 The Iranian tribes, including Qashqais and Tangestanis, resisted the British occupation in Southern Iran. On 12 July 1915, the Tangestani tribes of southern Iran attacked the British forces near Bushehr. The British dispatched a force from Basra to Bushehr and inflicted a heavy defeat on the Tangestanis. Between 1915 and 1921, in the forests of the Caspian coastal province of Gilan, the ‘Jangalis’ nationalist movement, combined domestic objectives with anti-colonial and anti-imperialist agenda.

Towards the end of 1915, Sir Percy Sykes established a force, the South Persia Rifles, using local tribesmen. His mission was to counter the German influence in most of South Persia. After establishing headquarters at Shiraz, Sykes tried to restore order in the south; he paid subsidies to tribes who remained loyal and rounded up enemy agents and their Persian allies. The South Persia Rifles’ first action was at Bocaqci on 28 September 1916, where it defeated tribesmen who were being assisted by 25 escaped German prisoners. For the next two years, it was involved in similar actions, but its existence increased the hostility of local tribal leaders, who saw it as a potential threat to their interests and independence. In July 1918, the Abadeh garrison of the Rifles mutinied. Sir Percy Sykes left Persia in October 1918 and the Rifles were finally disbanded in July 1921. 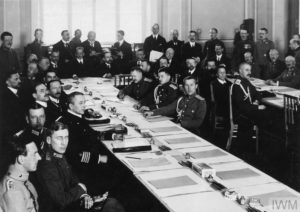 German, Austro-Hungarian and Soviet delegates at the table during the peace negotiations at Brest-Litovsk, December 1917 © IWM Q 86806

The Soviets renounced their 1907 Anglo-Russian treaty rights in Persia at Brest-Litovsk in March 1918, and Lenin sent a formal message to the government of Persia ‘repudiating all Tsarist privileges and agreements that are contrary to the sovereignty of Persia’. After the February Revolution in 1917, front-line Russian forces dissolved and started to retreat from Iran. Ottoman forces quickly took action and occupied north-western Iran and Tabriz. They stayed in Tabriz up until 23 August 1918, despite two British efforts to dislodge them. 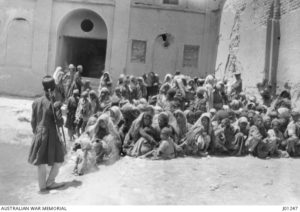 Successive seasonal droughts caused widespread famine during 1917 – 1918. The requisition and confiscation of foodstuffs by the occupying armies to feed their soldiers added to the famine.

After the Russian Revolution in 1917, pro-German tribesmen under Mirza Kuchik Khan rebelled against the Russian forces in the north of the country. Britain sent Major-General Lionel Dunsterville and an elite group of British, Canadian, Australian and New Zealand soldiers from Mesopotamia. They became known as the Dunsterforce. Its mission was to safeguard the immense oil installations at Baku from the Ottomans and the Germans, while organising local groups of Armenians, Georgians, and anti-Bolsheviks to safeguard the strategically important trans-Caucasian railway and approaches to Afghanistan and India.

The Battle of Baku, which began on 26 August 1918 ended with the evacuation of Dunsterforce on 14 September. They fought a determined and well-orchestrated action but were vastly outnumbered and underequipped and were forced to concede Baku and its prized petroleum resources to the Ottomans. They also struggled to mobilise the residents of Baku, who were too pre-occupied with infighting to mount a united defence. Despite this, Britain’s wartime prime minister, David Lloyd George, believed the Dunsterforce had succeeded in keeping the Ottomans and Germans from acquiring much-needed oil for six crucial weeks of the war in August and September 1918.

Once the Ottomans capitulated in late October 2018 and the war in the Middle East was officially over, British troops poured into Northern Iran to complement their control over the South.

The British government showed no sign of following the Russians and declaring the 1907 and 1915 conventions null and void. With the collapse of the Tsarist and Ottoman Empires, Britain now not only dominated Persia itself, but had extended control to most of the surrounding regions. The Iranian Prime Minister was replaced by the pro-British Hassan (Vosough) Vossug ed Dowleh, who played a leading role in the negotiations with the British Ambassador. After six months of secret negotiations, the Anglo-Persian Agreement was declared on 9 August 1919. This agreement was widely viewed as establishing a British protectorate over Iran. However, it aroused considerable opposition, and the Majlis (parliament) refused to approve it.

With a coup d’état in February 1921, Reza Khan, who ruled as Reza Shah Pahlavi, 1925 – 1941 became the preeminent political personality in Iran. Aḥmad Shah was formally deposed by the Majlis, the national consultative assembly in October 1925 while he was away in Europe. The assembly declared the rule of the Qājār dynasty to be terminated.

Iran and the First World War – a selective bibliography

This is a selective bibliography of books, chapters in books, journal articles and other resources on the subject of Iran (Persia) in the First World War. This bibliography contains details of print and online resources; these were checked for access in September 2021.