Geographically, the Italian Front was a continuation of the Western Front south of neutral Switzerland. Although it led to a huge number of casualties – over two million altogether – it was effectively a stalemate, with Italy and Austro-Hungary facing each other across the north-eastern borders of Italy for three years. The decisive battles took place in the lowlands and foothills but the Italian Front will be remembered for the extreme fighting conditions in the high mountains.

Why did Italy enter the war?

At first Italy was neutral, but its ancient enmity with Austro-Hungary was never far from the surface. Italy had only become a united kingdom in the mid-nineteenth century, and in 1914 Austro-Hungary still occupied the “Italia irredenta” (Unredeemed Italy) regions to the north and east of Venice, which had been lost in Napoleonic times.

In 1882 Germany had imposed on these two traditional enemies a tripartite mutual defence alliance and so it was expected that Italy would join the Central Powers at the outbreak of the First World War. But the Italian Army had lost much artillery in a colonial adventure in 1911 – 1913 and declared neutrality, hoping to gain her territorial ambitions by diplomacy.

Great Britain was anxious to deny Central Powers access to the Italian peninsula and consequent threat to Allied navies in the Mediterranean, and so offered substantial inducements to persuade Italy into alliance by the secret Pact of London of 26 April 1915. Italy declared war on Austro-Hungary on 24 May 1915.

Where did most of the battles take place? 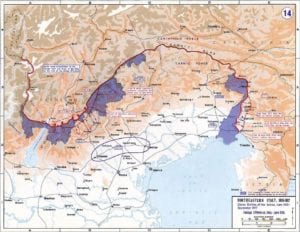 The Italian offensive strategy was limited by the Alpine wall to costly attempts to reach and cross the Isonzo (Soča) River – there were no less than twelve battles on the Isonzo during the war. The Austro-Hungarians defended strongly-fortified superior positions whilst concentrating on the offensive against Russia and also trying to defeat Serbia. In May 1916 they radically changed their strategy and attacked the Italians, at first making significant advances in the Trentino – but Brusilov’s offensive obliged them to return forces to the Russian front, contributing to the first Italian success at the Sixth Battle of the Isonzo in August 1916.

Fighting in the mountains

Nevertheless there were important actions in the mountains between the Italian and Austro-Hungarian borders. The Alps were unlike any other theatre of the First World War. Although outnumbered by three to one, the Austro-Hungarians were able to occupy higher positions in the mountains and could hold off the Italian forces. Heroic Italian attacks were attempted up steep mountainsides, and trenches dug into solid Dolomite rock along the ridges. Splintering rock from the artillery fire made it 70% more lethal than on the soft soil of the Western Front. Both sides dug tunnels into the mountainsides, sometimes for protection but also to mine enemy positions. Supplying the front lines was extremely difficult: horses and mules were employed where motorised transport could not be used on the mountain tracks, and the Italians even had to resort to local people carrying individual shells up to the troops. In winter both sides were reluctant to leave their hard-won positions, and in December 1916 thousands of soldiers were killed when avalanches struck the region. With impasse both on the plains and in the mountains, there seemed to be no chance of an early resolution.

War in the Alps 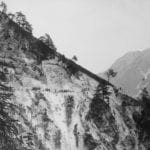 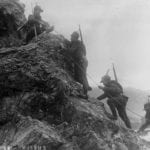 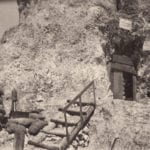 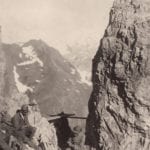 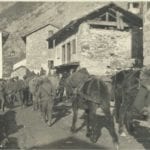 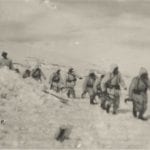 How did the Italian campaign affect Germany?

Germany, though not legally at war with Italy, had been using the Austrian naval depot at Pola, south of Trieste, to send submarines down the Adriatic and into the Mediterranean through the Otranto Strait. Increasingly troubled by the perceived military incompetence of their ally, Germany declared war on Italy on 27 August 1916. 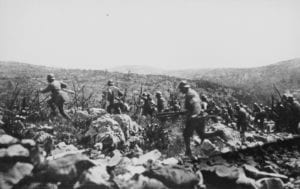 Italian infantry at the Ninth Battle of the Isonzo – 1 November 1916 (Source: Wikipedia)

Both sides now considered the 1916 lessons of Verdun and the Somme and recognised that reinforcement of a secondary front could have proportionately better results and oblige the principal enemy to transfer forces away from France and Flanders to support a threatened ally. In January 1917 at the Allied Conference in Rome Lloyd George proposed such a strategy but the French were already committed to Nivelle’s planned offensive, leaving the British to transfer sixteen batteries of heavy artillery to Italian command. Aware that the collapse of Russia could enable a heavy attack on Italy and threaten the Taranto overland route to and from the Near East, the Allies prepared a detailed plan to transfer a force from the Western Front.

In the Eleventh Battle of the Isonzo in August 1917 the Italians won the Bainsizza Plateau from an enemy suffering crippling shortages of men and materiel, but Italy also was beset by civil unrest and military mismanagement. On 24 October 1917 her defensive dispositions north of the Bainsizza were proved inept by the rapid advance from Caporetto of the Austro-Hungarians with a strong German reinforcement. Having at last broken out of the Isonzo area they drove the Italians back over the Tagliamento River and exposed the North Italian plain whilst effectively leaving Italy without reserves.

French and British troops arrive from the Western Front

Immediate appeal to her allies received immediate support. Six French divisions were followed by five British (a sixth was held back after the German counter-attack at Cambrai). For men who had survived the Third Battle of Ypres the one-week train journey into Italy – cold but sunny and delighted to welcome them – must have seemed like a new lease of life.

During the winter of 1917 – 1918 the British held a two-division front on the Montello on the south bank of the Piave River. Here the Italians had stabilised a tense but quiet front against an enemy whose advance had slowed as the roads broke up. In February 1918 the Germans began to withdraw to the Western Front for their Spring Offensive, and the British 5th and 41st Divisions followed with General Officer Commanding (GOC) Plumer, leaving Cavan commanding XIV Corps – 7th, 23rd and 48th Divisions – to move in March 1918 to the Asiago.

The Asiago is the final step down from the Alps to the coastal plain and less than fifty miles from the Adriatic. In their 1916 offensive the enemy had occupied much of the narrow defensive strip now to be held by an Italian/British/French coalition force. The defences were out-dated and a single road circuit served the British two-division front facing the small towns of Asiago and Canove.

The destruction of an Austrian machine in the gorge of the Valley of the Brenta by Sidney Carline 1918 © IWM (Art.IWM ART 2678)

A policy of nightly raids and patrols was immediately introduced, with heavy work in upgrading defences. The first large-scale action was defence against an assault on the British trenches by twelve Austro-Hungarian divisions on 15 June 1918. This was the right hook of a two-hook offensive. The stronger left (eastern) hook crossed the Piave River and held the south bank of the Montello against Italian counter-attacks for a week, during which the RAF prevented reinforcement and resupply across the river. On the Asiago the enemy broke into the 23rd Division’s right flank but were quickly expelled. They made substantial early gains against the 48th Division on the left where some battalions were much weakened by ‘mountain fever’ – the Asian flu. They were driven out by the following morning.

By dividing their forces the Austro-Hungarian army had failed in the ‘Battle of the Solstice’ and were no longer able to mount an offensive, but their ‘Winterstellung’ reserve line prohibited an advance on the Asiago and so the British mounted several large-scale raids. In September 1918 infantry brigades in Italy were reduced to three battalions. This general reorganisation had not been applied earlier in Italy because of shortage of rail transport.

In October the 7th and 23rd Divisions were transferred to the Piave area in preparation for the Battle of Vittorio Veneto, planned by the Italians to break the link between the enemy Isonzo and Mountain Army groups. As a preliminary, the British were to capture Papadopoli Island on the Piave River by a small-boat operation begun on the night of 23 – 24 October. This enabled construction of two trestle bridges for crossing to Papadopoli by night of 26 – 27 October. The following day the two British divisions gained the east bank of the Piave as a right flank-guard to the main Italian crossing upstream, but because the river rose unexpectedly this main crossing was delayed, obliging 7th and 23rd Divisions to act as a spearhead. This they did successfully and the Austro-Hungarian Isonzo armies began to retreat eastward on 28 October, harried by the RAF. Despite very trying conditions, Allied advanced parties had pursued the Austro-Hungarians over the Tagliamento River by the time an armistice was agreed on 4 November.

The 48th Division, ordered to keep pressure on the enemy on the Asiago, discovered on 1 November that they were withdrawing and so quickly organised a break-through of the ‘Winterstellung’ and pursuit up the Val d’Assa. They advanced forty miles in three days onto Central Powers territory before halting to allow their Italian allies to take the symbolic prize of the city of Trent before the Armistice.

Ironically President Wilson’s insistence on respect for the national aspirations of minorities prevented Britain from honouring at Versailles the promise made in early 1915 to support Italian claims to Trieste. The Italians felt themselves betrayed and their sacrifices disregarded, and so became receptive to the blandishments of Fascism.

Based on an article by Dale Hjort