From Edinburgh to Egypt

From Edinburgh to Egypt: Nurse Elsie Russell‘s war as seen through the lens

At the outset of the First World War, approximately 300 nurses served in the Queen Alexandra’s Imperial Military Nursing Service, with a small ‘Reserve’ of women who augmented these numbers when required. As many more nurses needed to be recruited as quickly as possible a call went out for suitably qualified and experienced women to join the Reserve [QAIMNS (R)]. Like their counterparts in the regular service, these women were educated, of good social standing and had to have completed 3 years of nurse training in a hospital approved by the War Office.  With very few exceptions they were over 25 years of age and single. Elsie Russell was one of those who met the criteria for appointment, and she responded to the call for recruits. Elsie’s personal service file survived and has been digitised by the National Archives (Ref: WO 399/5780). She was a keen photographer, and her wartime experiences were captured in her photographs. With the kind permission of her grandson, Stuart James, we have been able to use them to illustrate her story. 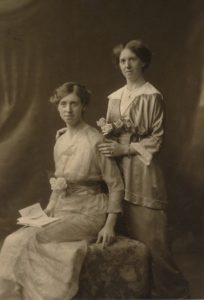 Elsie Russell was born in Edinburgh on 27 August 1884. She was the youngest daughter of John and Catherine Russell, who had 7 daughters and 1 son. John Russell was an editor with the Chamber’s Journal in Edinburgh and author of The Haigs of Bemersyde: a family history (William Blackwood and Sons, 1881). He died in 1894 when Elsie was only 10 years old. Elsie was educated at the George Watson’s Ladies’ College in Edinburgh. Her mother, Catherine Russell died in 1903. 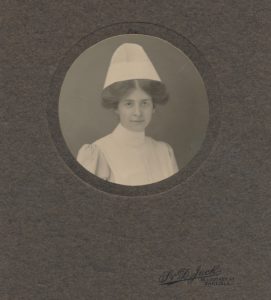 From 1904 – 1907 Elsie trained at Craig House, a psychiatric hospital in the Morningside area of Edinburgh where she was awarded a ‘Medico-Psychological Certificate’. From 1907 – 1911, Elsie undertook her general nurse training at Cumberland Infirmary in Carlisle. Once qualified she worked for a short period at the Royal Infirmary in Gloucester, before moving back to Edinburgh where she worked in private nursing, with the Scottish Association of Trained Nurses. 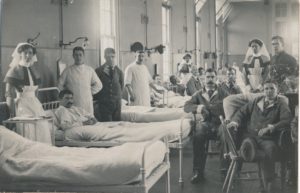 Soldiers on a ward at Cosham, some wearing their ‘Hospital Blues’ (Elsie on far left) (Photo courtesy of Stuart James)

Very soon after the outbreak of the First World War, Elsie applied to join the Queen Alexandra’s Imperial Military Nursing Service Reserve and in December 1914 she was sent to the Queen Alexandra Military Hospital in Cosham, Portsmouth, where she would have cared for soldiers who had been sent back from the Western Front.

‘her patients well nursed and happy’

In July 1915, she was assessed as ‘fit for active service’, and received a very favourable report from Matron A A Murphy:

‘Acting Sister Miss E Russell has served under me for more than six months. I have formed a very high opinion both of her professional ability and administrative capacity. Both as a ‘Sister’ and a nurse her work has been exceptionally good but her capability was specially shown in organizing her work and the work of those under her, with judgment, tact, common sense and method – her ward was always in good order – her patients well nursed and happy, and she has the power of making her orderlies work cheerfully at all times. Both in the hospital and among her fellow workers, her influence was always to a high tone generally’.

That same month, Elsie was sent to Egypt, where she served first at the No 19 British General Hospital and then at Ras-el-Tin Military Hospital, both of which were located in Alexandria. Unfortunately, in September 1915 Elsie became ill with Sand-fly fever and had to return to England, initially for 3 weeks sick leave, which had to be extended for 3 months until she was well enough to return to Egypt at the end of the year.

At some point Elsie moved from No 19 (19th) British General Hospital to No 21 (21st) British General Hospital, Ras-el-Tin, Alexandria, which was a barracks with a hospital caring for troops involved in the fighting in Sinai, Palestine and Mesopotamia. It is possible that she spent most of 1916 at the Ras-el-Tin hospital as her album contains many photographs from there. 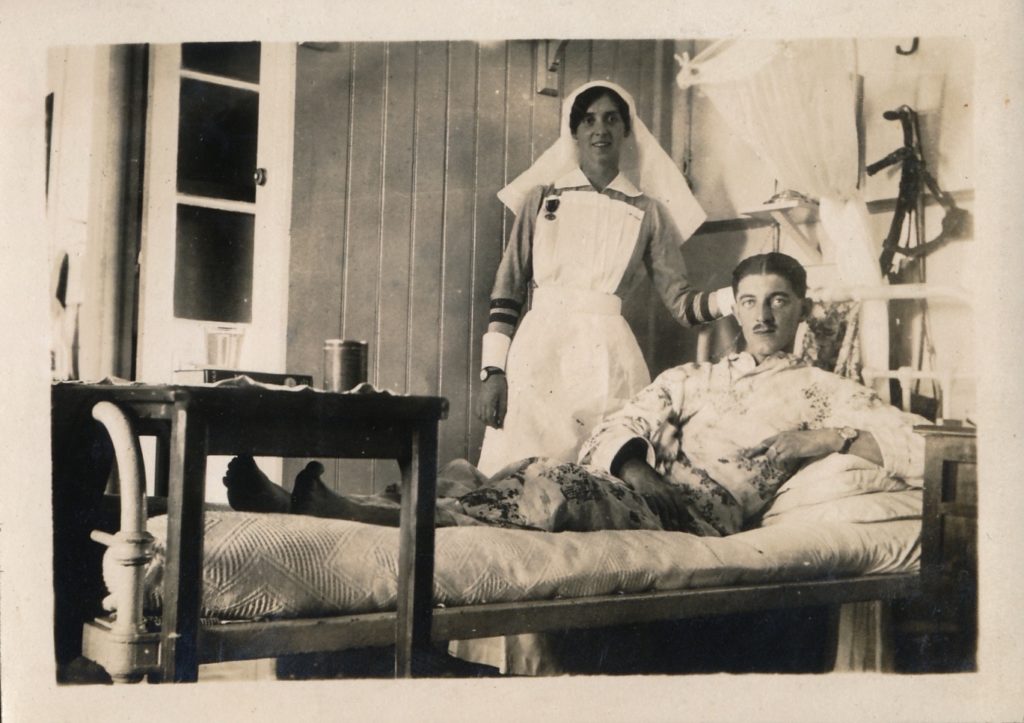 Off duty in Egypt 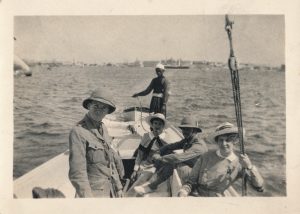 In addition to her nursing duties there is evidence in her photographs of the opportunities that she and her colleagues had to explore the country, to meet local people in markets and to make visits to the various sites of antiquities.

Stuart says, ‘My mother always said what a lovely, happy person she was and I think that comes across in the photographs. It looks like they had quite a good time with picnics, boat trips and excursions, but I think the reality also included rampant dysentery and suffering, also the likelihood of never going home’. 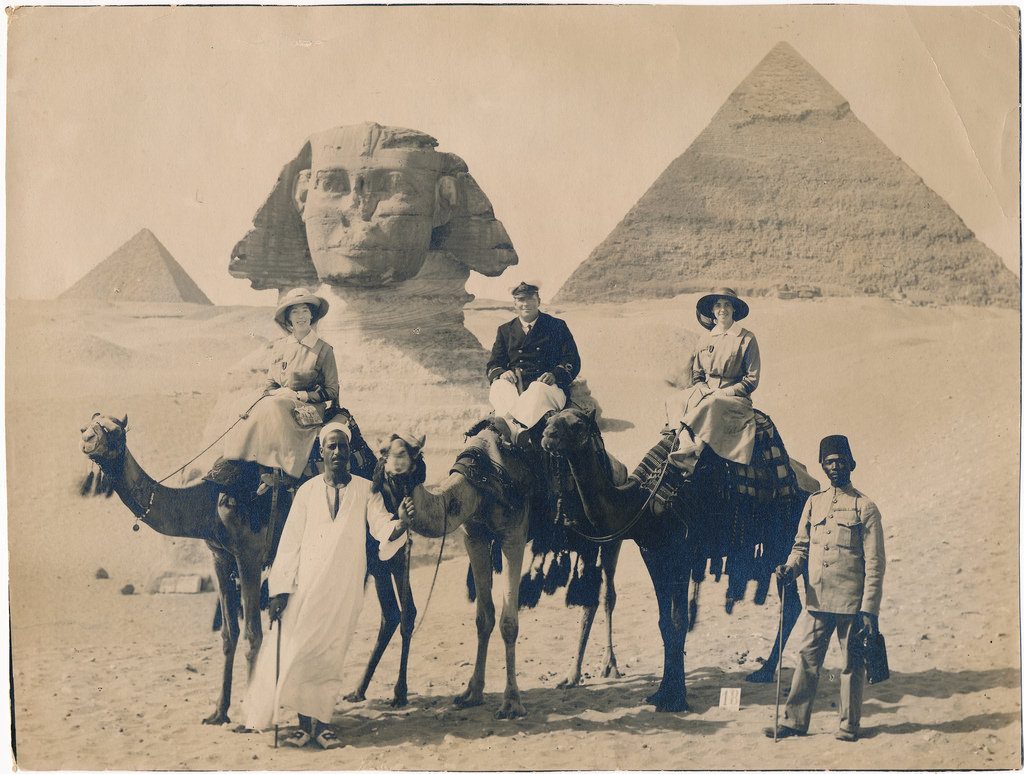 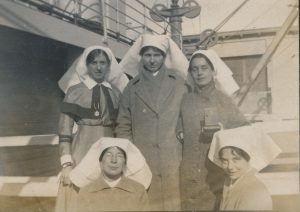 Elsie’s service in Egypt ended in January 1917 as she was then deployed to serve on the hospital ship, HMHS Essequibo. Elsie joined the ship at Alexandria on the 14 January 1917 and her name was recorded in the ship’s log (National Archives, Ref: WO 95/4144/5), by Major John D Gimlette, Royal Army Medical Corps, who was at that time the medical officer in command. The ship left Egypt for England on 16 January, arriving in Southampton on 26 January.

After a short turn around, it sailed from Southampton on 31 January, but instead of returning to Canada immediately, it sailed to Le Havre where on 1 February troops were taken on board. It left there on 3 February and arrived in Dublin on 5 February, where the troops disembarked. It sailed for Liverpool on 6 February, where it was berthed for approximately 2 weeks and after a refitting it set off for Halifax, Canada on 20 February with 575 troops on board from Canada and Newfoundland.

The Essequibo was at sea until 1 March. The troops disembarked on 5 March and the weather in Canada was recorded as ‘heavy snow & cyclone’. 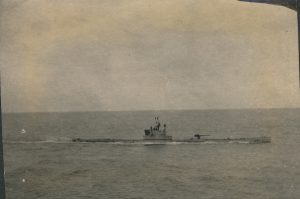 The ship set off for its return journey to England on 7 March. After several days of what Major Gimlette described as ‘usual routine at sea’, the ship encountered a German submarine on 15 March and the ship’s log reads:

’15th     3.30p.m. two shots fired at ship by German submarine about 2 miles off, subsequently held up by the enemy till 4.15p.m., then allowed to proceed without harm, locality near coast of Ireland – Cape Clear – weather fine, no panic’.

The Essequibo was confirmed as a hospital ship and was allowed to continue her journey and arrived back in Liverpool the next day. This incident was recorded by Elsie. Elsie’s personal papers indicate that she served on the Essequibo ‘for four months’, so it is likely that she made further journeys to Canada before leaving the ship at the end of April 1917.

In May 1917 Elsie was sent to Hampstead Military Hospital, but she had to tender her resignation from June 1917 to September 1917 due to a family matter, as one of her sisters was ill. She was re-employed from 25 September and sent to Prees Heath Camp in Whitchurch, Salop. The camp had originally opened in 1915 as a training base for the British Army, but as casualties mounted, it became a hospital with a fully-fledged barracks where Elsie worked for a year until October 1918, when she finally resigned her service as she planned to get married. 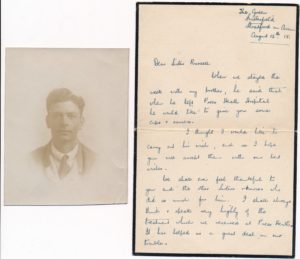 Whilst there at Prees Health Camp, Elsie was clearly highly thought of by her patients. In her album there is a photograph of a soldier and a letter sent to her by the sister of the soldier. Unfortunately, there was no record of the soldier’s name in the album, but he was almost certainly Sergeant Joseph Morgan (T4/057920), Army Service Corps, who died on 28 July 1918, aged 28 years. Sergeant Morgan served as Thomas Williams and was the son of Frederick and Betsy Morgan, of Sutton on the Hill, Derbyshire. He is buried in Snitterfield, Warwickshire and remembered on the village war memorial, where it indicates that he lived at the address on the letter and died in a hospital in Shropshire.

In December 1918, Elsie married Francis (Frank) William Melville in Edinburgh.  In 1919 she was awarded the Royal Red Cross 2nd Class, for ‘valuable nursing services in connection with the War’. Her name is listed in The London Gazette, 9 April 1919 (Suppl. 31281 p.4679) and an entry in the Nursing Mirror describes these decorations being awarded in 1920 by King George VI at an event in the ballroom of Buckingham Palace. 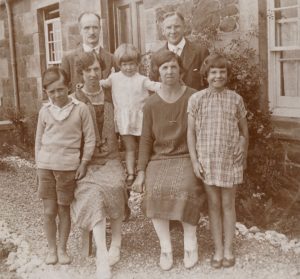 Elsie Melville seated left, her son on far left, daughter in middle and Frank standing on left with other family members in 1927 (Photo courtesy of Stuart James)

Elsie and Frank had 2 children, a son Craig born around 1919 and a daughter, Mhorag in 1925. The family remained in Edinburgh and lived happily at 129 Dalkieth Road. Frank died in 1955 and Elsie was tragically killed in a road accident in 1961.

After the end of the war Elsie put away her albums for safekeeping, where they remained until they were passed on through the family to her grandson, Stuart James who digitised her photographs nearly one hundred years later.

With thanks to Stuart James for allowing us to share Elsie’s story and for use of the photographs.

With additional research, Elsie’s story has been compiled by Lyn Edmonds, ‘Away from the Western Front’ Project Lead.