Mesopotamia After the War

Mesopotamia after the war

The Sykes-Picot Agreement was drawn up in secret between a British and French official, both with extensive experience in the Ottoman Empire, to divide up the Ottoman Middle East between the victorious Allies. When the Agreement was signed, on 3 January 1916, the timing was not fortuitous. The Allies had been defeated at Gallipoli in the January, Kut was besieged and the bloody First Day of the Somme was not far in the future. 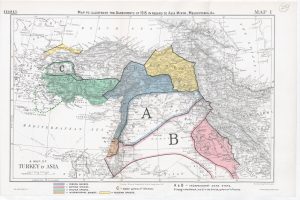 Map of spheres of influence in the former Ottoman Empire as agreed at the Treaty of Versailles in 1919 (Source: Wikipedia)

‘Sykes-Picot’ is often used as a shorthand explanation for all of the problems of the Middle East. It divided the region into five areas, with Britain and France each gaining a zone of control and a zone of influence, with Palestine becoming an international zone. What is usually forgotten is that the French zone extended into modern-day Turkey, and there were also Russian zones in the north.

In Mesopotamia, the three vilayets (provinces) each fell roughly into a different zone. Basra was to be under direct British rule, while Baghdad and Mosul were under British and French influence respectively. Militarily, these divisions were of no importance. Townshend had already crossed the line between the Basra and Baghdad vilayets in 1915 and when Maude retraced the advance, no consideration was given to the Sykes-Picot proposals. Indeed, Maude and his successor Marshall continued into Mosul vilayet without a pause. Revenge for Kut, linking up with the Russians and the pursuit and destruction of the Ottoman Army was their consideration. 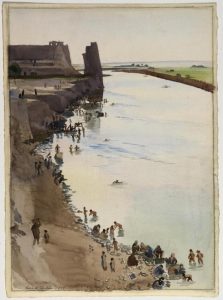 The Agreement had more to do with pre-war diplomacy to avoid conflict between the European Great Powers than the Middle East. The French zone of influence in Mosul was a deliberate inclusion to provide a buffer between British influence in Baghdad and a Russian zone in Armenia. Before the 1907 Anglo-Russian Convention, the most likely flash point in Central Asia was a clash resulting from the Russian Empire’s southwards expansion and the British Raj’s northwards push to the Himalayas – that is why there is a sliver of land joining Afghanistan and China, to prevent a clash.

The Agreement was, by the end of the war, irrelevant. British Prime Minister Lloyd George asked his French counterpart to give Mosul to the British because that reflected the reality – no French troops had fought in Mesopotamia so why should France benefit from British efforts? Lloyd George’s request was agreed to.

With the end of the war, there was no reason why Mesopotamia, or part of it, should not be returned to the Ottoman Empire. At the San Remo Conference of 1920, the Allies decided upon the Mandate System whereby Britain and France would take responsibility and develop their territories into independent states. 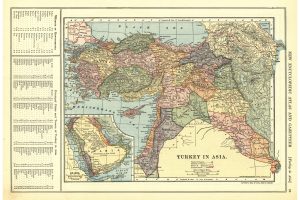 Before the First World War the Ottoman Empire was divided into ‘vilayets’, as shown in this 1909 map. Modern Iraq was formed from three of them – Basra, Baghdad and Mosul. (Source: Wikipedia)

Iraq was created by amalgamating the three Ottoman vilayets of Basra, Baghdad and Mosul. This is similar to the creation of Czechoslovakia and Yugoslavia about the same time. A problem in 1914 had been the position of small states which were vulnerable to their larger neighbours. Also, it was considered necessary for states to have access to the sea for trade and commerce. An independent Kurdish Mosul would be landlocked but as part of Iraq it had access to the sea at Basra.

Unsurprisingly, this was not what the Arab nationalists had in mind. The Iraqi Revolt in 1920 broke out along the Euphrates, while the Kurds rebelled for their own independent state. By late July, the armed tribal rebels controlled most of the mid-Euphrates region. The success of the tribes caused the revolt to spread to the lower Euphrates and all around Baghdad. In one particular incident, the railway at Al Kifl, south of Baghdad, was attacked and the local Political Officer requested assistance from the garrison at Hillah to restore order. This became known as the ‘Manchester Column’ incident and led to the capture of the Khan al-Shilan prisoners. The Revolt was eventually put down with an estimated 10,000 killed. 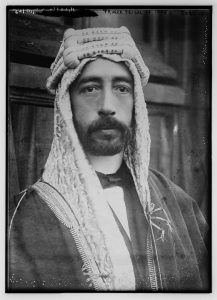 To find a solution, the British appointed Prince Faisal as King of Iraq. Faisal was the son of Hussein of Mecca in whose name the Arab Revolt had been fought and Faisal had led the revolt so was a war hero. He was also not an Iraqi, which meant he was above local factional politics and feuding. Briefly, in 1920, he had been King of Syria until deposed by a combination of a French invasion and poor support from Syrian nationalists. He was conveniently available in 1921 for the new Iraqi throne.

Under King Faisal, Iraq gained increased power from the British advisors. Most importantly, in 1932, after 12 years of the British Mandate, the Mandate ended and Iraq joined the League of Nations as an independent state (although British advisors remained). However, this was not without its difficulties. Shi’a clerics were linked with Iran, minority communities feared persecution in a majority Arab state and a pro-German military coup temporarily deposed the monarchy in 1941. This provided the British Army’s first victory of the Second World War. 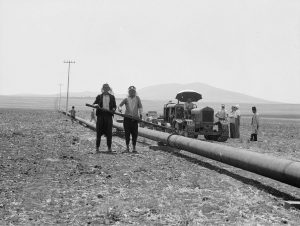 The Iraqi Petroleum Company pipeline was built in the 1930s to connect Iraq’s oilfields to the Mediterranean. Here it passes through Palestine, near Mt. Carmel (Source: Wikipedia)

Oil started to be exported from Mosul in the late 1930s and by the 1950s oil revenue was transforming the country but the monarchy’s link to the West made it vulnerable to Arab nationalism.

On 14 July 1958, during a military coup inspired by Egyptian nationalists, King Faisal II and most of the Royal Family were murdered. Iraq became a republic. The leader of the coup, Brigadier Qasim, was murdered five years later by another coup by the Ba’ath Party; Saddam Hussein would rise to power in the Ba’ath Party. Sixty years on, peace is still a distant memory in Iraq. 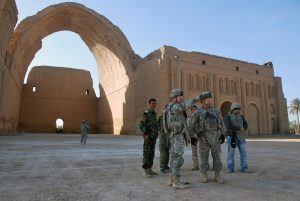 In 2009 American and Iraqi soldiers returned to the scene of the 1915 battle at Ctesiphon (Source: Wikipedia)