Over the centuries many prisoners of war have left evidence of their presence by drawing, scratching or carving words, shapes or other graffiti on the walls of their cells. Their reasons may have been creative, to fill their solitude or very often it was to leave evidence that they had been incarcerated in case they did not gain their freedom.

During their time spent in Khan al-Shilan some of the Manchester Regiment prisoners also left inscriptions on the walls. These included drawings as well as text. Unfortunately, those that were on one floor of the building no longer exist, but many others remain. We have tried to decipher their words, but after 100 years many have faded so as to make them illegible. It has proved quite difficult to examine them from photographs, which we have enhanced to improve their legibility and we include some of them here. 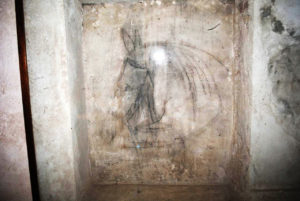 Drawing of a horse by one of the prisoners (Photo: Faez Albaidhani; enhanced version)

The drawings may not be very sophisticated, but nevertheless are quite poignant because they clearly had meaning to the men who drew them. They include one of a man’s head, one of a woman, one of a horse’s head and two of buildings. 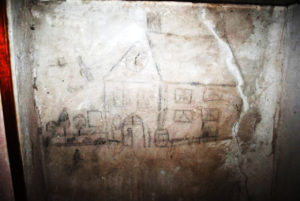 Drawing of a building by one of the prisoners (Photo: Faez Albaidhani; enhanced version)

The building in this drawing has some interesting details. It appears quite large for a house and has a clock on the front, which would have been more representative of a British church. There are echoes of farm life in the drawing with animals and two figures, one in the doorway and one that may be working in a field. The drawing also shows a hanging sign, like those found outside public houses. The windows have curtains and there is a water butt which is connected to a down pipe from the roof. Sadly, we shall never know whether this was a particular building drawn from memory or whether it was sketched to remind the soldier of various aspects of his home life. The drawings do not indicate the names of the artists.

Most of the textual inscriptions have been very difficult to interpret, but a few have been more straightforward to decipher, and this has been particularly rewarding when we have linked them to a named soldier. So far these men can be identified from the wall inscriptions that we have seen: 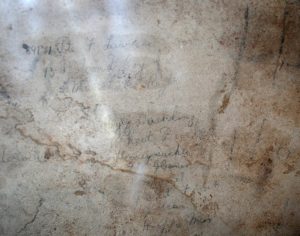 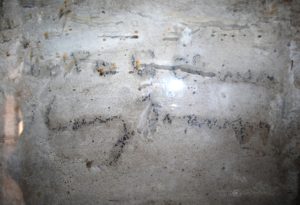 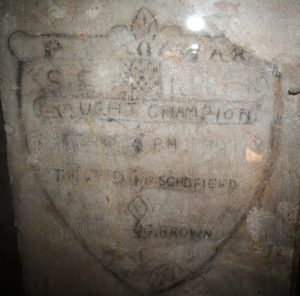 Interestingly, the names of Pte Schofield and Pte Brown are inscribed in a shield, showing that they were competitors for the prison ‘Draught Champion’. The soldiers may have had a draught set sent to them, or perhaps they fashioned one from materials in the prison. The shield is decorated with a small draught board at the centre top. There is another name on the shield, which is yet to be identified; if the surname begins with M rather than what appears to be H, then it could be Pte P Murphy. 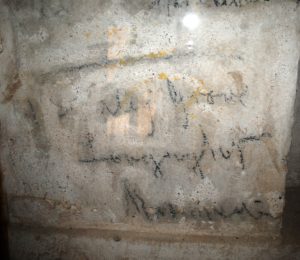 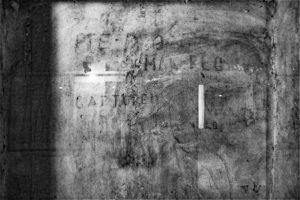 A further image supplied to us by Dr Turath Jamil could read Pte D Owen; the only known prisoner with D as an initial and the only other to have a surname beginning with O, apart from Pte W Oliver. It also reads CAPTURED, followed by the date, 25 July 1920.

From some previous work done by Dr Sadiq Khalil Abid, other named inscriptions can be connected to:

Other words that can be deciphered are names of the hometowns of some of the men, including Liverpool and of course Manchester.

Some other inscriptions reported by Dr Sadiq Khalil Abid include:

‘You will find life’

‘Patience is a virtue’

‘British enter Kufa 20/10’ – this is interesting as it refers to the ending of the siege of the garrison in Kufa, which would have led to the prisoners being released, so indicating a late inscription

There are many other words which have yet to be deciphered.