This project arose when we were contacted by a group of international volunteers working alongside the Khan al-Shilan Najaf Heritage and 1920 Revolution Museum, located in Najaf, Iraq. The project is focused on the use of the Khan al-Shilan as a prison for captive British and Indian soldiers during the 1920 Revolt in Mesopotamia (Iraq). The soldiers were held in Khan al-Shilan for several months and some of the soldiers inscribed the walls of their cells with written messages and drawings. Some of the inscriptions contain information which could be useful in identifying the names of these soldiers. The key goals of this project are to decipher and transcribe as many of these inscriptions as possible and to see if any can be linked to known prisoners. The precise number of prisoners and their names has been the subject of some research and debate over the years, so it was decided to revisit the previous work as part of this project.

Finally, it is hoped that this project will raise awareness of this important period in Khan al-Shilan’s history and the condition of the remaining wall inscriptions, which will need further protection to preserve them for the future. 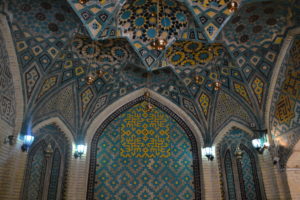 Khan al-Shilan is now an important museum in Iraq. It was built in 1899 in the holy city of Najaf in the Ottoman Empire. It was built originally to accommodate visitors to the Imam Ali Shrine. It was one of the biggest and highest buildings in the area at that time and this helped to mark it out for other changes of use. It was used as the headquarters of the local Ottoman government and in 1915 it was taken over after a local insurgency. In 1917, the British occupied the building and used it for their local governor, then as an army training facility and then as a detention centre for local rebels. The next significant event for Khan al-Shilan was the 1920 revolt against the British forces when it was used to house the British and Indian prisoners captured after the fighting at nearby Hillah on 24 July. Since then, the building has had many uses and for a while it was neglected, but it has been restored and is now ‘Khan al-Shilan Najaf Heritage and 1920 Revolution Museum’. 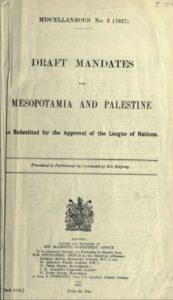 Under the terms of the 1919 Peace Treaty of Versailles, the Arab countries of the former Ottoman Empire were put under the mandated control of the victorious allies. At the San Remo Conference in April 1920, Britain was awarded the mandate for Palestine and Mesopotamia, as Iraq was called in the Western world at the time. France assumed responsibility for Syria and Lebanon. The principle was that those territories should eventually become independent, albeit under the guidance of one of the victorious Entente countries.

In Iraq, the British introduced a new administration which had mainly British Political Officials and many Iraqis began to fear that their country would be incorporated into the British Empire. There was soon growing resentment to new British policies such as new land ownership laws, which upset tribal leaders and a new tax that people had to pay to be buried in the Wadi-us-Salaam Cemetery in Najaf, where Shia from all over the world wished to be buried. Fines and detentions were imposed for non-payment of the taxes. 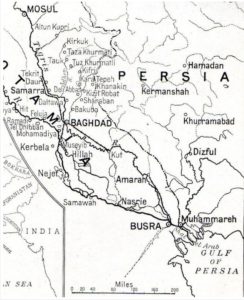 Mesopotamia in the 1920s (Source: unknown)

Discontent with British rule materialised in May 1920 with the onset of mass meetings and demonstrations in Baghdad. The start of the revolt was initially centred on peaceful protests against British rule, but armed revolt broke out in late June 1920. The British, and their inexperienced local political leaders, were caught off guard. The revolt soon gained momentum as the British garrisons in the mid-Euphrates region were weak and the armed tribes much stronger. By late July, the armed tribal rebels controlled most of the mid-Euphrates region. The success of the tribes caused the revolt to spread to the lower Euphrates and all around Baghdad.

In one particular incident, the railway at Al Kifl, south of Baghdad, was attacked and the local Political Officer requested assistance from the garrison at Hillah to restore order. This became known as the ‘Manchester Column’ incident and led to the capture of the Khan al-Shilan prisoners.