29 January 2018 was the centenary of the death of William George Arscott. To commemorate the day, two events took place, one in Devon and one in Greece.

In his home village of Drewsteignton, fifty local people met at the Drewe Arms, the pub just across the village square from the Arscott family home. The event concluded with a reading of the eulogy below and 100 changes of bells rung in the church where William himself had been a ringer.  The video captures the mesmerising sound of the bells as they rang out into the cold night.¹

At the Sarigol Military Cemetery, a wreath was laid at William George Arscott’s grave and the eulogy read out. Thank you to Apostolos Nalmpantis for doing this for us.

Click on any photo in the gallery below for a larger image. 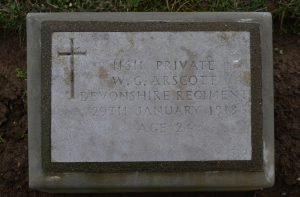 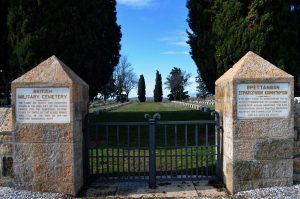 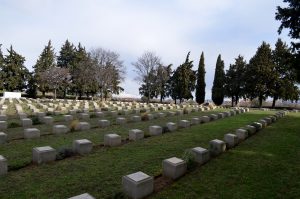 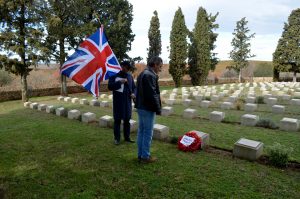 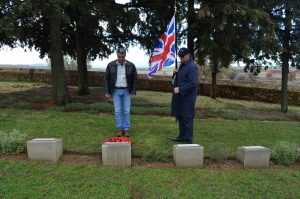 We are here to remember Private William George Arscott, Service Number 11611, of the 10th Battalion, the Devonshire Regiment. Private Arscott was killed in action on 29 January 1918, exactly one hundred years ago today, at the age of just 24.

Known by his friends as George, he had travelled far from home. He was born in the village of Drewsteignton in Devon, England, the son of Thomas and Mary Arscott. It was a small, quiet farming community and George’s first job was as a farm labourer. He was also on the team of bell ringers in the local church.

In 1914 George was working as a stone mason at Castle Drogo, a grand mansion being built on the edge of Dartmoor. At the outbreak of the war, he joined up with several of his young workmates.  The Clerk of Works wrote to George ‘I hope you will have a good time, do your duty for the King and Country, and come back at the end of the War’.

George’s life in the army took him to training camps in Britain, then to France and finally on to the Salonika Front where his regiment was engaged against the Bulgarian army. We can only imagine how overwhelming it must have been coming from a simple life of agriculture in a small close community and entering a world so unusual to him – feeling like being on a different planet.

On 29 January 1918, the 10th Battalion was sent on a raid of the Bulgarian-held village of Akindzali. The raid was successful and the Bulgarian forces were driven out of the village. Only two soldiers in his Battalion were killed, but sadly William George Arscott was one of them.

Today, a century later, we remember the life of William George Arscott, both here in the cemetery where he is buried and in his home village in Devon. The newspaper obituary sums up George’s character for us: ‘his quiet unassuming manner won for him the esteem of all his fellow employees’.

For us today, the bravery that William George showed in sacrificing his life for us is something that should, and does, inspire us. Rest in Peace.

¹. The video is not a recording of the whole 100-change session, so experienced bell-ringers will notice unexpected changes due to the editing process. This is a reflection of the recording, not the ability of the Drewsteignton ringers!