We received entries from all over the world – Britain, Ireland, France, India, Pakistan, Serbia, Australia and New Zealand – and were struck by the multiple viewpoints and the wide range of styles, but also by the focus on the stories of individual people, which brought the wider history to life.

Congratulations to our winners! We hope you enjoy reading their work. Click on the PDF page next to the citations below to open the short story or poem. Here you can read all the shortlisted entries. Copyright remains with the authors. 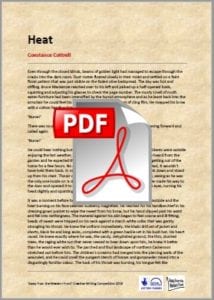 This short story brings together different strands of a soldier’s life – traumatic memories, recuperation, comradeship – and has an excellent twist at the end, as a short story should. The choice of ‘heat’ as the theme means that the author is able to combine a central feature of the African campaigns with something that was deeply personal to all the soldiers who were there at the time, especially the Europeans. This allows her to link the historical with the personal (and psychological) in a very effective way.

Runners up: ‘The Long Road East’ by William Bowden-Ritchie and ‘Welcome to East Africa’ by Charlotte Lee 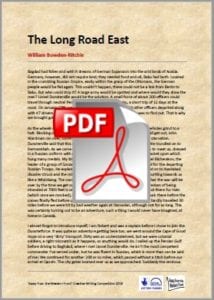 ‘The Long Road East’ is written in a journalistic style, echoing the style of authors writing at that time, such as Rider Haggard, which gives it an added authenticity. The major strength of the entry, however, is its historical detail. The author writes about an aspect of the First World War which has been almost entirely forgotten, yet has real drama and romanticism, including details which point to a lot of research on his part. The entry is a creditable addition to our website and our broader project aim of raising public awareness about the wider, yet lesser-known, aspects of the First World War. 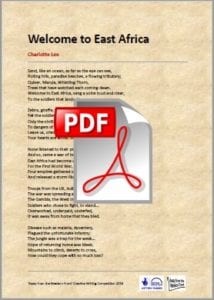 ‘Welcome to East Africa’ uses metre and rhyme effectively, especially in the opening verses, contrasting the beauty of the environment with the horror of the events which unfolded there. This is actually a feature of many of the campaigns which took place away from the Western Front – in places like Greece, Gallipoli, Palestine and the Italian Alps. First World War poets were fascinated by this. The author has obviously done her research, and includes plenty of details about the East African campaign and the fact that it was so multi-national. 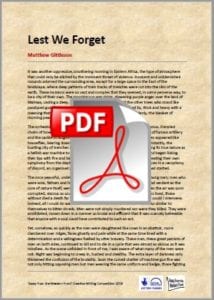 ‘Lest We Forget’ by Matthew Gittleson. The central idea of this story, that the actions of humans on the battlefield seem inexplicable and contrary to nature, is very well expressed. Using a tree as the voice of the author allows us to step back from the human experience and become more objective. The action is placed in the East African campaign and the writer picks out the extraordinary valour of the colonial soldiers who fought for the British and German empires. 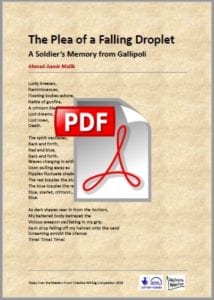 ‘The Plea of a Falling Droplet’ by Ahmad Aamir Malik. This poem’s use of metaphors to capture the experience of defending the Turkish shore against the Allied attacks is particularly strong, highlighting the inevitability of repeated waves, the inexorable march of time and the helplessness of the soldier to alter this. The features of the Gallipoli campaign are clear in the poem – the amphibious and naval attacks, the shelling, the carnage on the beaches, and the dogged defence. Very impressive. 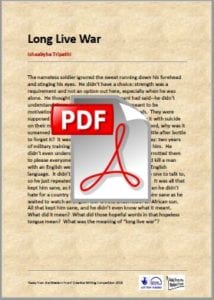 ‘Long Live War’ by Ishaabyha Tripathi. As a piece of creative writing this entry focusses on one simple idea and uses this to epitomise the writer’s experience of the war away from the Western Front, where the majority of troops on both sides were colonial, and many of them – as described – not English speakers. The entry also manages to convey something of the contradictions of war, along the lines of ‘Oh What  A Lovely War’, where soldiers become ironic and fatalistic about their situation. This is all the more poignant in the choice of writer, who cannot appreciate the irony due solely to lack of knowledge of the language. 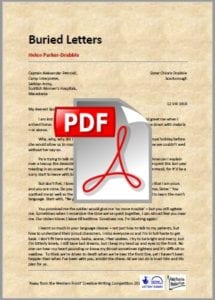 The author’s chosen approach – reconstructed letters – offers a route into the hearts and minds of the three writers so that we were able to empathise with them in the way that one can with original objects and documents. Each writer has been given a distinctive voice, so that it’s almost possible to believe that these are actual letters. The effect is made all the more authentic by the historical context, which comes over as very realistic, and is undoubtedly based on extensive research. We also liked the modern context, which the author is obviously part of – that of family history researchers who have opened up the history of the First World War, including our own project, through their painstaking work.

An audio version of ‘Buried Letters’

Runners-up: ‘The Princess Beatrice’ by Antony Dunford and ‘The Cheecha’ by Peter Susa 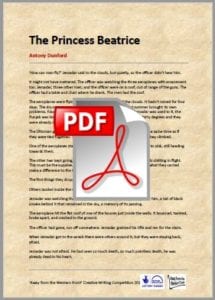 In ‘The Princess Beatrice’ the narration, and the dialogue between the Punjabi soldier and the Australian pilot both ring true, so that we believe the story and empathise with the central characters. The casual acceptance of death is chilling yet historically accurate. The historical context is excellent, including the involvement of men from all over the world. The events in Kut are significant for many reasons, including starvation, the ignominy of the British surrender and the occasion of the first airdrop. The short story adds something of the fable to the historical record, and will help us in one of our main aims – to raise awareness of the First World War away from the Western Front. 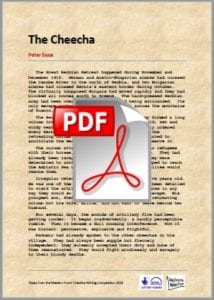 In ‘The Cheecha’ the author chooses a personal moment to bring to life a wider issue. Besides its relevance to the First World War in Serbia, this short story has a universal theme, repeated through history, including today. On the Western Front it was professional armies which faced each other, but in many of the campaigns away from the Western Front local militias played a much more important role. The author does not dwell on the emotions of the parting, but we are aware that these are still there under the surface. The historical context is good, helping readers to engage with a period in history which has largely been forgotten in Britain. 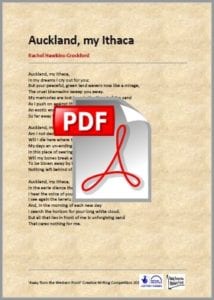 ‘Auckland my Ithaca’ by Rachel Hawkins-Crockford. In its song-like form this poem captures something of the soldier’s life on campaign, thinking about his home and enduring the hardships of military life. The classical reference opens up a further angle by making us think about soldiers who have fought and travelled in this region for many centuries – as indeed reflected in some of our ‘Away from the Western Front’ sub-projects. The military context is caught through the reference to the Ottoman Turk as an ‘exotic enemy’ but the main enemies – as with so many of the campaigns fought away from the Western Front – are the climate and the environment. 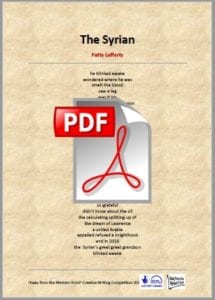 ‘The Syrian’ by Patty Lafferty.  The simple idea that history is repeating itself in Syria is well expressed. The poem uses short lines and vivid images to take the reader through the experience of waking up after being wounded in war. The historical context is clear and the references to T E Lawrence and Feisal place the action in its time. 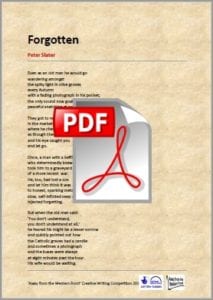 ‘Forgotten’ by Peter Slater. The tight focus on a single person’s experience opens up a much more universal story around loss and memory. The poem also speaks about how the intensity of war means that those who experienced it are sentenced to a life where they feel that nobody can ever understand what they went through. This idea is well expressed, as is the embarrassment of the man who had tried to engage the veteran in conversation, but makes his excuses and leaves. The military context is not explicit but the reference to a keffiyeh places it in Palestine, where there has been so much suffering in the decades following the First World War.

Our competition originally had three age categories – ’10 and under’, ’11-18′ and ‘Over 18′. Unfortunately in the ’10 and under’ category we received no entries which complied with the rules so we took the decision to transfer the value of the prizes to the other categories, and were therefore able to offer book tokens to two runners-up as well as the winning entry.