< Horses in the War

For the members of Minehead Quilters and for members of the public at events where the banner was on display, this project had quite an impact. 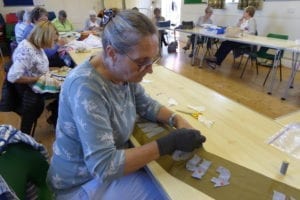 Many of the quilters had to learn new skills for the project – not just technical skills but also carrying out historical research and working together on a creative piece. The final result was deeply satisfying for some of them and gave people an unexpected angle on a side of the First World War about which they knew very little.

At the outset, a few of the quilters were doubtful about their ability:

Some learnt new things about the war:

Some learnt new skills, including working with fabrics and teamwork:

For many it was an enjoyable experience:

The following comments were from exhibition visitors:

Some were inspired to take the project further:

Here’s one particular story to demonstrate the success of the ‘Horses in the War’ project, as described by Jane Sharp, the project manager:

Click here for an evaluation report about the ‘Horses in the War’ project.