< Horses in the War 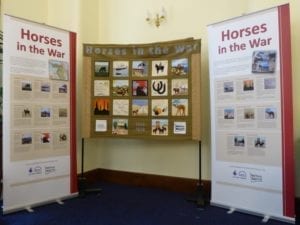 The completed banner and pop up panels (Photo: Jane Sharp)

After extensive research and months of quilting, the ‘Horses in the War’ banner was completed, along with two explanatory panels, in time for our national conference on 30 October 2018. On this page you can see the individual squares in detail, along with the text on the panels. Click on an image for a larger version. All photos courtesy of Jane Sharp. 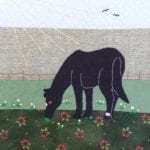 Within just twelve days the number had been increased to 165,000 animals, entirely by impressment, and a year later, in August 1915, to 534,971.  By 1917, the Army had almost 870,000 horses and mules.  To cope with this increase, additional depots had to be set up in the United Kingdom, and later in Egypt and Salonika.  Animals for these areas were originally sourced from Australia and North America.  The government of British India procured horses and mules for the campaign in Mesopotamia. 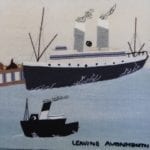 The troops left Britain by ship.  Most had never taken a horse on a ship before, although they had practised boarding trains with their animals.

They would ride up to the side of a big ship at the quay and dismount, put their saddles and blankets in sacks and wait in turn to take their horses up the gangway. Some horses were difficult whilst others were docile and easy to lead.  The soldiers led their mounts down into the bowels of the ship, hooves clattering on iron plates. 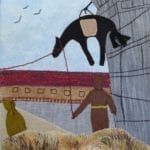 Some animals had to be lifted aboard in a sling, and then lowered to stalls below decks.  Animals would then spend the entire journey in their stalls.

‘Below it was dark and claustrophobic’, one soldier wrote in his diary. ‘Each horse had little room, only 2ft. 3 inches in width between each bar.  They couldn’t lie down during a voyage; they stood with their heads out of the stall and were watered and fed in a metal trough in front of each one’. 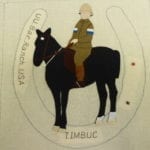 When war broke out it became obvious that that the United Kingdom did not have enough horses and mules. They had to be sourced from elsewhere.  Well over 400,000 were shipped to Britain from North America.

‘Near his forequarter was a brand ‘U U’ with a bar underneath’, wrote one soldier, ‘which showed that he had come from a ranch in America – the Wild West, I was told.  In the American style he stayed put when the reins were dropped from his head to the ground.  Little did I know that he would save my life on many occasions’. 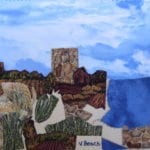 V Beach was one of the main beaches on the Gallipoli Peninsula at Cape Helles on which the 29th Division were landed on 25 April 1915 and where they sustained heavy casualties.

Norman Woodcock wrote ‘we were to land on the beach at Cape Helles, on the Gallipoli peninsula, where the village of Sedd-el-Bahr stood.  The fort nearby had been shelled by the Navy and was out of action’.

The British Army later took horses onto V Beach. During attacks they were tied up along the beaches to keep them safe, away from the fighting.

‘The battle was on’

Gallipoli is a very beautiful place, with wild flowers and sparkling sea. It was a strange contrast for the men sent to fight there.

Many soldiers expressed the deeper emotions they were experiencing through the war by writing poems.

The daffodil in this square is special.  For the centenary of the Gallipoli campaign a daffodil was bred by Cornwall grower Mr Ron Scamp.  It took Mr Scamp twenty one years to develop this daffodil.  It is named ‘Gallipoli Dawn’. 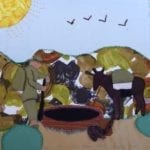 When the British troops arrived in Gallipoli it soon became clear that water was in short supply.

Wells were dug so that the precious commodity could be reached.

The picture shows ‘Murray’s Well’, one of many dug for the supply of fresh water during the Gallipoli campaign. Found in Gully Ravine, the well was dug in late July 1915. The Gully was one of the few places where fresh water could be obtained, and of the many wells sunk this was the most productive. 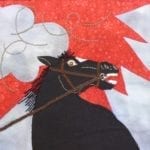 Well-bred horses were more likely to suffer from shell shock and be affected by the sights and sounds of battle than their less highly strung compatriots.

On the Western Front, cavalry forces weren’t used extensively after the fighting started, but things were different in the Middle East.  The war zone covered an enormous distance and trench lines were localised.  As a result the war was much more mobile. Often the troops used their horses to travel, and then dismounted to fight. 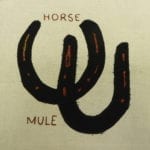 Horses and mules have different shaped feet, as shown by the shoes on this square.  Farriers travelled with the troops to shoe the animals. Horses fell into categories, Light Draught, Heavy Draught and Cavalry. Draught horses, in general, are broader in the shoulders than saddle horses. The Light Draught horse was also a riding horse.

Mules and donkeys are slower than horses but they can carry far more weight and have amazing stamina.  A pack mule can carry about one third of its weight. 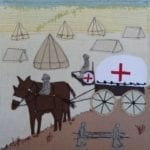 Mules and donkeys were essential for transport, especially in the difficult terrain of Salonika.

The long-eared, sure-footed animals were used for pulling loads, such as supplies and ordnance.

In this square they are pulling a Red Cross ambulance wagon. The wounded were taken to casualty clearing stations and field hospitals for treatment. It must have been a very uncomfortable ride on the rough tracks. 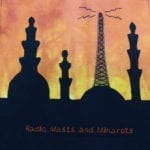 Part of the job of the Royal Engineers Signal Service was to lay field cable on the ground rapidly, in order to keep forces in touch with other formations.  They would do this using wagons and horses as a team whilst running out wire from the back, at a gallop. Draught horses were used for this operation as they could pull heavy weights.

Communications were essential and had to be maintained.  In Basra, Mesopotamia (now Iraq) a radio station was built which was capable of sending messages to the Eiffel Tower!

Sending messages from a distance 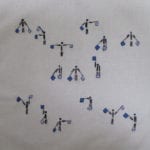 The signallers’ job was to send messages. When it wasn’t possible to send these electronically, they used old fashioned semaphore. This was used less often on the Western Front because it was dangerous to stand in full view above the trenches. In the war of movement of the Middle East, it was not always possible for the cable layers to keep up with the advancing armies so semaphore was more commonly used.

What do you think the message on the banner is saying? Click here for more information. (The answer is at the bottom of this page).

Soldiers and their companions 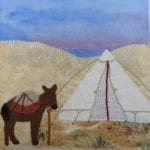 Soldiers became very attached to their horses and mules and the presence of them often increased morale among the men.

The animals had to be cared for under very difficult conditions, including times of reduced food rations and lack of water.  They had to be groomed, fed and watered.  They were companions, living creatures with whom a soldier could share his fears and emotions.

Photographs from the war show soldiers grieving next to the bodies of their dead animals. 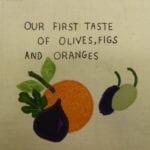 The soldiers could try fruits they had never tasted before as they were not freely available back home in England, except for the rich.  For some, it was their first taste of oranges and olives.

It was not only the soldiers who experienced these different fruits. In Egypt they often bought strings of figs as a treat for their horses. These were eaten with relish by the animals.

Camels in the First World War 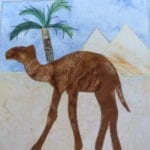 The Imperial Camel Corps was raised in December 1916 for service in the Middle East. Camels are superbly adapted to the desert, and were valued because of their ability to carry a soldier and rations for several weeks. They were also noted to be much calmer under fire.

One advantage of using camels was that they could evacuate the sick and wounded more expeditiously than the conventional mounted brigade. They could carry two canvas stretchers, either side of a specially constructed saddle. In these a man could sit or lie full length. Camels could go where wheels could not.

The Battle of Jerusalem 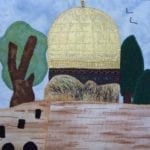 General Allenby led the British Egyptian Expeditionary Force (EEF) during the Sinai and Palestine Campaign against the Ottoman Empire, capturing Jerusalem on 9 December 1917.  Two days later Allenby made his formal entry into the city on foot through the Jaffa gate instead of by horse or vehicles to show his great respect for the holy place.

For the British back home, the capture of Jerusalem was the best Christmas present they could have had. It marked the beginning of the end of the campaign against the Ottoman Empire.

Horses after the War 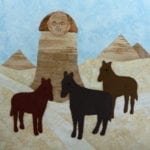 What happened to the horses after the war? Sadly, most of them were put down, causing great distress to the soldiers they had supported through the trauma of war.

Some survived but in much reduced circumstances. When Dorothy Brooke travelled to Cairo in 1930, she saw thousands of abandoned old war horses still being used by the local people.  She was horrified to see how different they were from the sleek and healthy horses she’d loved at home in England.  She formed the Brooke charity which looks after the welfare of horses to this day.