From Lancashire to Mesopotamia

The Mesopotamian Campaign took place in what is now Iraq between 1915 and 1918. The Mesopotamian Expeditionary Force, comprising regiments from the British and British Indian armies, fought against the multi-national Ottoman army in a long-drawn-out campaign starting at the Persian Gulf and progressing up the Tigris and Euphrates, reaching Baghdad in 1917. Total Allied casualties were 93,000, of which 27,675 were killed in action or died from wounds or sickness. The Mesopotamian Campaign ultimately had two strategic global goals for the Allies: to retain access to British India and to control the increasingly important Persian oilfields which exported from the Abadan Refinery close to Basra. The Royal Navy was converting from coal to oil, and during the course of the war the internal combustion engine was becoming essential on the Western Front, with aeroplanes (55,000 had been made by Britain by 1918) tanks (the British and French armies had made 6,506 by 1918), and motor vehicles such as lorries, cars and motorcycles (the British alone had made 113,000 by 1918). Behind these factual details were thousands of human stories – soldiers from all over the world fighting in the searing heat of the desert. After the more recent Gulf and Iraq Wars, which were fought in exactly the same area, there is a particular resonance for the Mesopotamian Campaign, with many serving soldiers having experienced the same conditions. Through modern media there is also a heightened awareness of the impact these wars can have on the civilian population, and in modern Britain we can encounter ex-patriot Iraqis, Kurds, Iranians, 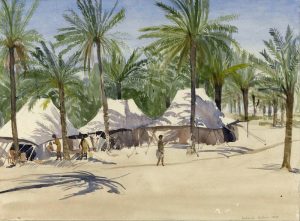 Working with the Lancashire Infantry Museum in Preston, Lancashire County Council’s Heritage Learning Team developed a project with four secondary schools across the county. The team worked in the schools to develop students’ historical enquiry skills, uncovering stories of local soldiers who went to Mesopotamia, their families left at home, and producing educational resources about the campaign. In school, the teachers worked on the history of the Mesopotamia campaign with their students. After the research period, there was a body of work which the school children were able to draw upon to develop creative activities including graphic novels, paintings and a wall hanging.