In the West Indian territories, as in other parts of the British Empire, there was a surge of enthusiasm to sign up and defend the ‘Mother Country’ when war broke out. There was a fundraising exercise and enough volunteers stepped forward for a new regiment to be formed. However those that returned in 1919 were very different men from the eager recruits who had left four years earlier. 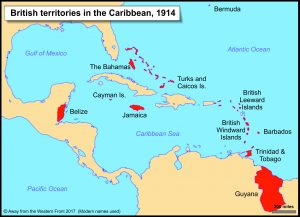 Britain’s West Indian territories in 1914 were spread across a wide area, from the mainland colonies of British Guiana (now Guyana) and British Honduras (now Belize) to Jamaica and all the islands spreading in an arc between Trinidad and Florida and, farther north, the island of Bermuda. The British had been colonising the region since the 17th century, establishing tobacco and sugar cane plantations using African slaves. Although the slave trade was banned in 1834 black West Indians were still an underclass with few rights. Nevertheless they were eager to join up.

The professionals and the volunteers 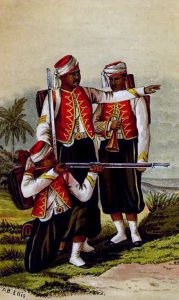 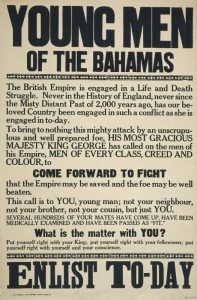 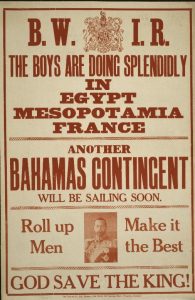 A recruiting poster for the British West Indies Regiment, 1915 (Source: Library of Congress) 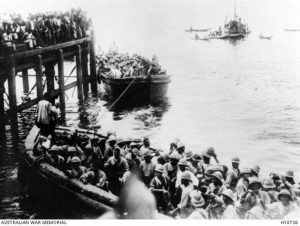 At the start of the war the only professional Caribbean regiment was the West India Regiment (WIR), originally formed in 1795 to garrison the colonies. This regiment had a strength of about 1,200 men, and was split between West Africa and the Caribbean. Its soldiers saw action from the early stages of the war in Cameroon, before moving on to East Africa where they were used on garrison duty until 1918.

The West Indian Regiment could not meet the demand from the thousands of West Indian volunteers who came forward to enlist. After some hesitation from the War Office, a new regiment was formed in October 1915 – the British West Indies Regiment (BWIR). This would become the largest Caribbean force in the British army, with over 15,000 men by the end of the war. The regiment recruited from all over the Caribbean, with Jamaica providing two thirds of the men. Black men living in Britain also joined the BWIR, as they had found that racial prejudices of the day usually made it hard for them to join white British regiments.

These racial prejudices also meant that the British army would not allow black soldiers to have combat roles, partly due to the fear that the experience of fighting might make them difficult to control when they returned to their colonies after the war. The BWIR was given labouring roles on the Western Front, such as delivering ammunition to the front lines, or building roads and railways. The realities of warfare came as a disappointment: having only seen the glamorous WIR troops, and having responded to the breathless recruitment posters, their high hopes were lost in the mud and chill of Flanders.

Not all the BWIR men went to the Western Front. Two of the BWIR’s 11 battalions – the 1st and 2nd – were sent to Egypt. From here they joined the Palestine Campaign and some of the men were given combat roles against the Ottoman Turks, taking part in the capture of Jerusalem in 1917.  General Allenby sent a telegram to the Governor of Jamaica: ‘I have great pleasure in informing you of the gallant conduct of the machine-gun section of the 1st British West Indies Regiment during two successful raids on the Turkish trenches. All ranks behaved with great gallantry under heavy rifle and shell fire and contributed in no small measure to the success of the operations’. More details about the BWIR in Palestine including the medals won can be found here. BWIR troops were also sent to Mesopotamia, where the Honduras contingent was given labour duties, including working for the Inland Water Transport.

When the war ended in 1918 the BWIR battalions were sent to the port of Taranto in Italy before returning home to the Caribbean. This was where the feelings of resentment after three years of service boiled over. The soldiers were held at the barracks and given tasks which reminded them that white officers’ attitudes hadn’t altered during the war, including cleaning out the latrines of Italian soldiers. The final straw came when they were denied the 50% ‘victory’ pay rise offered to British troops. Men in the 9th battalion rose in mutiny and white troops were called in to quell the uprising. One black soldier was executed and sixty were put in prison. The soldiers’ weapons were confiscated and later the whole regiment was disbanded and the soldiers sent home under guard.

For some soldiers, the arrival back in the Caribbean added insult to injury.  Most were denied victory parades, and the colonial authorities, fearing that young unemployed ex-soldiers posed a security problem, sent many abroad to work in sugar plantations. In 1919, returning BWIR soldiers rioted in British Honduras and Trinidad. There was no doubt that the experience of war and the discrimination they had encountered increased feelings of nationalism. A British government memo noted, ‘Nothing we can do will alter the fact that the black man has begun to think and feel himself as good as the white’. While in Taranto, sixty BWIR soldiers had formed the Caribbean League, which sought racial equality and independence from the British Empire. Imperial rule in the West Indies was to last a further forty years but the seeds of independence had been sown.

For more details about the BWIR in Palestine including some details of the medals won: Fighting for the Jordan Crossings. The soldier’s burden, n.d. [Accessed 29 November 2021]. Available from: http://www.kaiserscross.com/304501/319801.html