It’s important that we know how successful our activities have been, so for each part of the project we have carried out evaluation. This has included finding out what people knew before and what they learnt by taking part; asking them whether they have learnt new skills; whether the project has changed their attitudes and whether it has inspired them to look further or change things in their lives. We have also sought comments from people who saw the outputs of the project – in this case the film and exhibition. Here are some of the main findings, taken from the report written by Susan Francis.

Consultation as part of the process 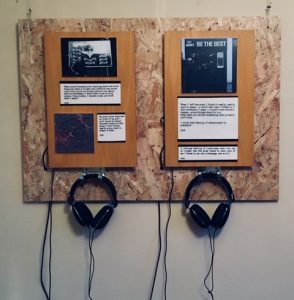 The ‘Salonika Stories’ project was different from our other projects: as military veterans themselves, the participants brought experiences with them which actually formed part of the exhibition. Reading the accounts of soldiers who fought in the Salonika campaign brought back memories of their own lives in the military. As a result the exhibition includes audio recordings and quotations, as well as the artworks. Even the artworks reference the experiences of modern soldiers set against those of the First World War. Browsing through the exhibition and the progress page for this project you can see the impact that it had on the participants. As one of the participants put it:

The Alabaré veterans who took part in this project developed skills. There were general skills such as discussion, observation, historical enquiry and teamwork, as well as more specific artistic skills such as monoprinting, silk-dye printing, photo layering and photo transfers.

Exploring the Salonika history raised quite a few emotions and the group had great empathy with the plight of the troops in such difficult and distressing conditions. They particularly identified with the possible mental health issues returning soldiers would have had, and talked at length how they would have been treated in those days and how it is only recently that they feel there is support for mental illness in the army now.

Helen also added the further distress caused to the rest of the family,

She also reflected on the changes in society that took place as a result of the collective experience of war.

They also deeply identified with the feelings of isolation and loss of direction when leaving the army and this became a theme we went back to a number of times.

In the words of Susan Francis, ‘The participants were initially very daunted at the idea of producing art or generating ideas for the project. It was a particular criterion of the project that each participant would develop their own individual response in a medium that suited them. This was perhaps particularly challenging for a group of veterans who were used to being given clear instructions rather than free rein to follow through their own ideas. By the end of the project however, they were quite confident to propose ideas and to reflect on their own and each other’s work, looking for symbolism and crossovers that would communicate the message they wanted to get across.’

The participants were clearly inspired, as shown by Mark in this comment:

It was also an enjoyable experience, according to Helen:

The audience – military veterans sometimes struggling with mental illness as well as homelessness – found the experience of working together on this project very therapeutic, helping them to heal themselves through the medium of art. Here are some of their comments:

In a world which is often unstable and stressful, building self-confidence is an important step towards healing, as shown by Oli in these two comments:

Feedback from visitors to the ‘Salonika Reflections’ exhibition

The temporary exhibition attracted comments about the relevance of the Salonika campaign, not just to the history of the First World War itself but to the lives of modern military veterans.

Click here for an evaluation report on the ‘Salonika Stories’ project.