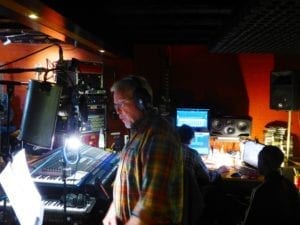 We have now completed a second professional recording of ‘No Parades’. We were delighted that Mark Tucker, who recorded the choir and piano version in 2017, was able to help us again. He attended a rehearsal of Sidmouth Town Band and produced a brass band backing track. Then on 15 January local singer Jeremy Roberts went to Mark’s fully-equipped studio in the depths of the Devon countryside to record the vocal track. We now have two excellent versions of this fascinating and important song.

We were delighted to hear that the Trench Choir performed ‘No Parades’ today as part of the Remembrance Concert in Malvern Priory. Es Hoyle wrote:

‘For many of the choir it was the highlight of the work we have done over the last four years. We were proud to sing in remembrance of various less remembered groups, ending our performance with this stirring song. The song went down well with the audience, who were proud to have included a song with this content within our service. I was thanked personally by several other community members for representing previously unrepresented groups, and for doing so in an entertaining way. The song appealed to the wide age-range present too’.

‘No Parades’ was performed today by a brass band – Sidmouth Town Band – with singer Chris Hoban and four backing singers. Here’s a recording of the event – it sounds fantastic!

‘No Parades’ was performed in front of an audience for the first time on 16 December 2017 and we’ve received this video of the occasion. We hope you enjoy it as much as the audience obviously did.

Today we are launching our music project. It will run for the remainder of the ‘Away from the Western Front’ project, until the end of 2018. A key element of the launch has been the production of a high quality demo track of the song ‘No Parades’. Work on this recording has been going on for some time. In the summer the song’s composer Chris Hoban supplied the score and audio demo tracks for the backing chorus. A group of eight singers from the Dartmoor-based choir Lost Sound met twice to rehearse the choral backing which you can hear in the choruses and behind the verses in ‘No Parades’. Chris himself plays the piano and sings the solo. The recording was made at the Mark Tucker studio, which was based in East Devon in October 2017. Click here to read a short evaluation report about the experience. 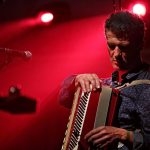 Chris Hoban is an acclaimed composer who has written songs for the well known folk group Show of Hands, besides being a solo performer in his own right. ‘No Parades’ has a personal connection for him: his grandfather Richard Hoban lived in British Guiana and joined the British West Indies Regiment as an officer. After the mutiny at Taranto, due to his good relationship with the soldiers, he was given the responsibility of conducting them home. 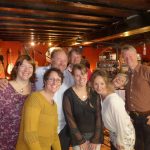 The Lost Sound is an amateur choir based in Buckfastleigh, on the southern slopes of Dartmoor. Led by professional singing coach Sandra Smith, the choir is founded on the principle of the high quality vocal control that is normally only achieved by professional singers. The choir mainly sings traditional and folk music, which is closer to the archaic ‘lost sound’ in all of us. 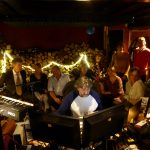 Mark Tucker is a leading recording engineer who has worked with Fairport Convention, Portishead, P J Harvey and numerous other artists. He is also a specialist in designing and setting up recording studios. ‘Away from the Western Front’ was very privileged to secure the services of such a well-respected studio.