One of the keynote speakers at our conference in Bristol today was Dr Anne Samson, coordinator of the Great War in Africa Association (GWAA). Due to centenary events taking place in Africa, Anne was unable to attend in person, but sent us her presentation, ‘Medical tentacles: Military Medical services in Africa, 1914-1918 and beyond’, which is available to view on our National Conference page. Anne has been involved in our project from the outset, contributing advice, editing articles and connecting us to the research work of the GWAA, especially the transcription of the Pike Report. 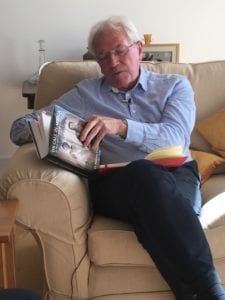 We were delighted to interview Dr Tony Jewell today. He is the grandson of Dr Norman Parsons Jewell who served as a Medical Officer in the East African campaign, writing diaries and memoirs and taking over 400 photos of his experiences, and Tony has edited the collection into a book, On Call in Africa, in War and Peace 1910-1932, (Gillyflower Publishing, 2016). This record has national importance (the diaries are held at the National Archives) and gives us an invaluable first hand insight into the campaign.

Volunteers at the Great War in Africa Association (GWAA) have been working hard transcribing the Pike Report and have now completed this. It is available on the GWAA website, along with background and contextual information.

Volunteers for the Great War in Africa Association have completed the first stage of transcription of the Pike Report into medical conditions in East Africa. The report was based on a visit to British East Africa (i.e. Kenya today) and parts of Uganda and German East Africa (i.e. Tanzania) between December 1917 and January 1918 and makes grim reading. Here is an extract from Surgeon General W W Pike’s report on a visit to a King’s African Rifles depot and military hospital in Uganda.

‘We visited the infectious section of the hospital of which Captain Duke stated he was in charge. Here we found a most disgraceful state of affairs. Patients dead, dying and sick, were lying together, no proper treatment was being carried out for the cerebro-spinal fever cases, no disinfectants were seen for the attendants or the Medical Officer who, however, admitted he had never visited these cases since he took over a week before. There were five cases of cerebro-spinal fever distributed as follows in four small ill-lit circular grass huts – No 1 A corpse and a delirious patient (naked); No 2 A corpse and a delirious patient (naked); No 3 A patient; No 4 was empty. There had been nine cerebro-spinal fever cases; six were dead, two apparently dying, one might possibly recover.

In the small-pox enclosure there were fifteen cases, three lying dead, two of these with other patients lying beside them and one in a hut alone; there was no sign whatever of any treatment for patients or disinfectants for attendants. Captain Duke said he went there to superintend the building of the compound wall daily, and then saw the patients.

We called in the Officer Commanding, Major Carew, who we had asked to remain outside to avoid infection, and showed him the state of things in the cerebro-spinal fever compound. Thereafter we each prepared a Report and handed it to the Officer Commanding for action. Owing to the gross neglect and inhumane want of treatment of these patients by Captain Duke, we placed him under open arrest, as there was no other Medical Officer available, in which case we should have suspended him entirely’.