Our Creative Writing Competition is not a new idea – in 1929 the magazine of the Salonika Reunion Association, ‘The Mosquito’, ran a Christmas short story competition for its members. They were veterans of the campaign, of course, so the entries were based on actual experience. Here is the announcement and a reminder from ‘The Mosquito’.

And here are the winning entries. Belated congratulations to Mr. Bowler, Mr. Bunning and Mr. Beer! (Click to enlarge) 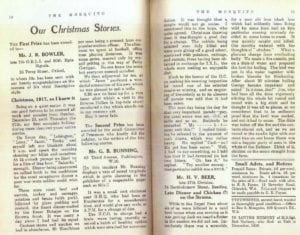 The photo shows soldiers enjoying a Christmas game of football two years before the one Mr. Bowler describes.

A poem for the armistice

Also in 1929, the poem ‘Who Won the War, and Why?’ was published in ‘The Mosquito’, and re-published along with the explanation below, in 1960. The poem had been written on the day after the armistice which ended the Salonika campaign on 30 September 1918. This was the first in a chain of events which led to the end of the war: victory over the Bulgarians led to the Ottoman supply lines from Germany being cut, and the Ottoman surrender a month later. Finally, once their eastern allies had been defeated, the Germans surrendered in November. It’s easy to imagine the poem being recited in a music-hall style at the GHQ Concert Party, with euphoric soldiers finally relaxing after the years of strain.