The vivid experience of fighting in the First World War led many men and women to poetry. Far from the mud and trenches of the Western Front, soldiers fought in deserts and jungles and on mountains and beaches, showing us a very different picture of the global war. Here, Connie Ruzich writes about poetic remembrances of the war in Mesopotamia.

‘Gather up the fumes of frankincense’

Posters from 1917 that attempted to raise funds for the British Mesopotamian Expeditionary Force depicted exotic tropical scenes. In reality, battles fought against the Ottoman Empire’s troops in Mesopotamia were fierce, and conditions were appalling. Summers were exceptionally hot, winters were bitterly cold, and the terrain ranged from mountainous deserts to swampy marshes. The siege of Kut was as bitter a military defeat as that suffered at Gallipoli, yet it is hardly remembered today. Beginning in early December of 1915, British troops found themselves encircled in Kut-al-Amara (a city in what is now Iraq). The siege began on 7 December; by the time British troops in the city surrendered on 29 April, 23,000 men had been lost to wounds, starvation, and disease, and the Ottoman army took 13,000 British soldiers as prisoners, many of whom died in captivity. Among the dead were many Indian troops. 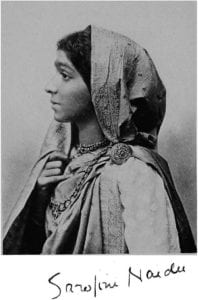 Naidu, who was elected President of the Indian National Congress after the First World War, was also known as the nightingale of India.  Her poem ‘The Gift of India’ commemorates the sacrifices of her countrymen, remembering those who ‘sleep by the Persian waves,/ Scattered like shells on Egyptian sands’.

The Gift of India

Is there aught you need that my hands withhold,
Rich gifts of raiment or grain or gold?
Lo! I have flung to the East and West
Priceless treasures torn from my breast,
And yielded the sons of my stricken womb
To the drum-beats of duty, the sabres of doom.

Gathered like pearls in their alien graves
Silent they sleep by the Persian waves,
Scattered like shells on Egyptian sands,
They lie with pale brows and brave, broken hands,
They are strewn like blossoms mown down by chance
On the blood-brown meadows of Flanders and France.

Can ye measure the grief of the tears I weep
Or compass the woe of the watch I keep?
Or the pride that thrills thro’ my heart’s despair
And the hope that comforts the anguish of prayer?
And the far sad glorious vision I see
Of the torn red banners of Victory?

When the terror and tumult of hate shall cease
And life be refashioned on anvils of peace,
And your love shall offer memorial thanks
To the comrades who fought in your dauntless ranks,
And you honour the deeds of the deathless ones,
Remember the blood of my martyred sons!

Born in Australia, educated at Oxford, befriended by Ezra Pound, and serving with the Mesopotamian Expeditionary Force, Fairfax’s poems were published in Mesopotamia: Sonnets and Lyrics at Home and Abroad, 1914-1919 (John Murray, 1919).  He dedicated his poetry to Brigadier-General E Dickson and Captain R S  Aitchison, writing, ‘These verses are affectionately inscribed in memory of some peculiar and many pleasurable adventures shared while serving with the Mesopotamian Expeditionary Force 1917-1919’. Two short poems from Fairfax’s book capture scenes from the often forgotten front in the Middle East.

The clouds are gathered and the wind blows,

The river is ruffled grey,

And swept in a curve like a sinister steel blade

In the hand of Destiny this sword severs our years,

Sunders the light and shade.

The plain turns black, and the wave turns gold,

Then dark, and the day is done,

And the bats swing out in circles,

And the stars wake, one by one.

There is a timelessness in the landscapes of the Middle East that James Howard Stables, also a British soldier with the Mesopotamian Expeditionary Force, captures in his poem ‘High Barbary’. Stables was from Leeds, the son of a vicar. Early in the war, he left his studies at Christ Church Oxford to enlist, and he served with the 15th Gurkha Rifles in India, Northeastern Pakistan, and Mesopotamia.  His small book of verse, The Sorrow that Whistled, was published late in 1916.

Cuts the imagination as a blade

Of dove-grey Damascene.  In many a raid

Back to Sicilian harbours, harried kine,

Pillaged Calabrian villages and made

The land a desolation….

Franks, Huns, Walloons, the pilgrims of the Pope,

All, all are gone.  The clouds are trailing hence:

So goes to Benediction some proud priest

—Go, gather up the fumes of frankincense.

‘Barbary’ is the romantic name given to the coast of North Africa, and at a first reading, the poem appears to romanticise wars of the past, when Barbary pirates attacked merchant ships, raided cattle (‘harried kine’), and pillaged Italian villages.  The choice of the word ‘pillaged’ itself is subtle and apt, for it has become a euphemism for the violence and terror that armies inflict on civilians during war, associated mainly with the distant past.

The poem invites us to look out over an alien landscape, but to see deeper with the eyes of the imagination that cut ‘as a blade/Of dove-grey Damascene’. Damascus steel was famous for its use in swords and knives, but when used as an adjective, ‘Damascene’ refers to a moment of insight that transforms one’s beliefs and attitudes – an epiphany.

That transformation from the romantic glory of war to emptiness and loss occurs in the last line of the first stanza of this short poem: the ellipsis and stanza break demand that we pause and consider the consequences of the raids that have made the ‘land a desolation’. The second stanza continues the shift, as names of past and present combatants and victims are jumbled together in a Whitmanesque catalogue of war (‘Huns’ was a derogatory term used for Germans and ‘Walloons’ are French-speakers of Belgium).  Linked by their absence, ‘All, all are gone’. The words seem almost prophetic in evoking the ‘Lost Generation’ who were killed during The Great War (an estimated 17 million dead).

Clouds of death (perhaps also evoking the deadly gas that was used in the war) are ‘trailing hence’, while a ‘proud priest’ in his finery emotionlessly continues the ritual of blessing. What are we to do or think?  The poem commands us to do the impossible, as if no rational response to war can be made: we are to ‘gather up the fumes of frankincense’. More than anything, the poem is saturated with images of impermanence, of things that fade and are lost forever.

Like so many others, Stables did not survive the war but died at age 21 in a battle near Baghdad in early 1917.  He has no known burial place, as his body was never found. Wounded and left behind when the British troops withdrew, he is presumed to have died in enemy hands. His name, however, is on the Basra Memorial in modern Iraq.

‘The Sorrow that Whistled is an unusual little book, as suits with its name. The writer, whom one takes to be young, revels in Eastern colour and fragrance. He can do something quite good and simple… On the other hand, he can do something extremely bad… Yet there is here a promise, and, not unconnected with it, indications that J.H. Stables is a young soldier. There could be no better school for a young poet who wants to shed the faults of youth than the trenches’.

Another poet who wrote about Mesopotamia was Gerald Caldwell Siordet. He was also an artist, and the sketch and watercolour below are his work. He died on 9 February 1917 while leading an attack on the Turkish position near Kut-al-Amara. His body was never recovered. 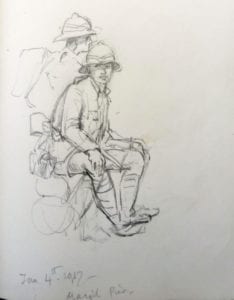 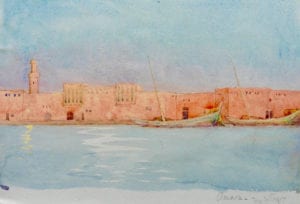