The First World War was a turning point, not just for warfare but for society as a whole. World empires changed hands, leading to major changes in the decades following the war. War became industralised: tanks replaced horses; machine guns replaced massed ranks of infantry; war took to the air; the telegraph allowed politicians to make battlefield decisions. 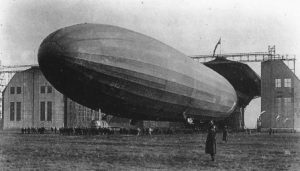 This German Zeppelin – LZ 104 – was sent to support troops in East Africa. It reached Khartoum before it was forced to turn back. (Source: Wikipedia)

The European empires called on their colonies to raise troops to support the war effort, with the result that people travelled all over the world with their regiments, seeing places they had never dreamt of visiting. However the war raised questions about colonialism, and calls for independence began to be heard.

It wasn’t all bad: the horrors of the war led to improvements in international aid and cooperation; returning soldiers were determined to improve society, leading to more democratic processes and state support for the underprivileged. The war affected the British psyche, with an awareness of the huge sacrifices made by individuals and the country as a whole, leading to state-sponsored remembrance, especially shown in the war graves and official war artists’ schemes.

This section introduces some of these issues.